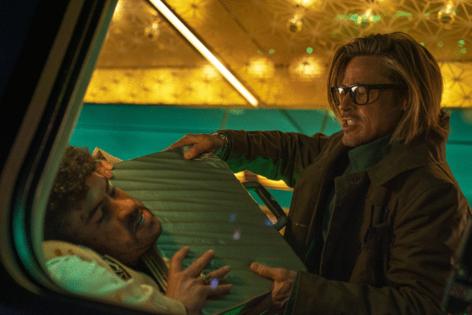 It’s full speed ahead for Brad Pitt’s “Bullet Train,” which won the box office for a second weekend in a row.

The action-comedy added $13.4 million in North America between Friday and Sunday to lead a quiet box office that didn’t include any new wide releases from the major movie studios.

“Bullet Train” debuted with $30 million last weekend, and has now made $54 million domestically and $114 million worldwide.

Directed by David Leitch, the movie stars Pitt as an assassin whose quest to recover a briefcase from a Japanese locomotive is complicated by other mercenaries onboard. Leitch was previously Pitt’s stuntman on movies such as “Fight Club” and “Troy.”

The solid second outing from “Bullet Train” was enough to hold off “Top Gun: Maverick” and the animated “DC League of Super-Pets,” which tied for second place with $7.2 million apiece.

Tom Cruise stars again in the sequel as hotshot Navy pilot Capt. Pete “Maverick” Mitchell, who this time is tasked with training a new generation of aviators.

“Super-Pets” stars Dwayne “The Rock” Johnson and Kevin Hart and follows a team of super-powered animals led by Superman’s dog. The family film has now made $58 million domestically and $109 million globally.

Rounding out the top five in North America over the weekend were Marvel’s “Thor: Love and Thunder” and Jordan Peele’s latest horror flick “Nope,” which tied with $5.3 million.

The highest-grossing new release of the weekend was the horror-comedy “Bodies Bodies Bodies” which debuted with $3.5 million to finish in eighth place. The film stars Amandla Stenberg, Maria Bakalova and Pete Davidson.

“Laal Singh Chaddha,” an Indian adaptation of “Forrest Gump” that got a limited release in the U.S., made nearly $1.8 million over the weekend.

Next up for movie theaters is Universal Pictures’ “Beast,” which premieres Friday and stars Idris Elba as a doctor who must protect his family from a stalking lion in South Africa.