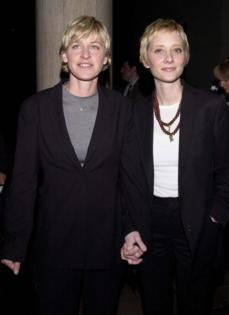 LOS ANGELES — After offering a tight-lipped reaction earlier this week, Ellen DeGeneres has spoken again about her former partner Anne Heche following reports that the actor is ‘brain dead’ after a fiery car crash in Mar Vista last week left her in a coma.

“This is a sad day,” DeGeneres tweeted Friday morning. “I’m sending Anne’s children, family and friends all of my love.”

The 64-year-old former talk show host first commented on Heche’s condition on Monday when approached by a Daily Mail photographer in Santa Barbara.

DeGeneres, who dated Heche from 1997 to 2000, kept her response short, saying, “We’re not in touch with each other, so I wouldn’t know.” She later added, “I don’t want anyone to be hurt.”

In 2001, DeGeneres spoke with the L.A. Times about the pain she felt after the pair’s breakup.

On Friday morning, a spokesperson told the L.A. Times that Heche’s “heart is still beating” but that she remains on life support.

“She was declared brain dead last night but has been kept on life support for organ donation,” rep Holly Baird wrote in an email.

According to a statement on behalf of Heche’s family and friends Thursday night, the actor is being kept on life support at the Grossman Burn Center at West Hills Hospital while medical staffers determine whether any of her organs are viable for donation, as had long been her wish.

“Anne had a huge heart and touched everyone she met with her generous spirit,” the statement said. “More than her extraordinary talent, she saw spreading kindness and joy as her life’s work — especially moving the needle for acceptance of who you love. She will be remembered for her courageous honesty and dearly missed for her light.”