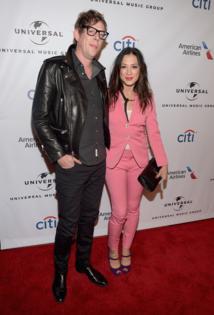 Just as singer-songwriter Michelle Branch announced the end of her marriage to Black Keys drummer Partrick Carney, she was arrested on Thursday after slapping her husband during an argument.

The “Everywhere” singer was taken into custody after Nashville, Tennessee, police were called to the couple’s home on Thursday for a possible domestic disturbance, according to an affidavit in the case obtained Friday by the L.A. Times.

Branch, 39, was booked and charged with domestic assault hours later and released after making a $1,000 bond, said John Adams, deputy chief of staff for the Davidson County Sheriff’s Office. She is scheduled to appear in court Nov. 11.

When police officers were called to the couple’s home, Branch told them that she and Carney “are having marital issues and had been arguing,” the criminal court affidavit said. Their argument escalated and Branch admitted to slapping Carney in the face “one to two times.”

Carney, 42, was also interviewed by law enforcement officials and said that Branch had slapped him, but he did not have any visible injuries, the affidavit said. Meanwhile, Branch’s mug shot, released Friday by the Metropolitan National Police Department, showed redness under her right eye.

The arrest occurred before the singer released a statement Thursday announcing the end of the couple’s three-year marriage and hours after she publicly accused Carney of cheating.

“To say that I am totally devastated doesn’t even come close to describing how I feel for myself and for my family,” Branch said in a statement to People and TMZ. “The rug has been completely pulled from underneath me and now I must figure out how to move forward. With such small children, I ask for privacy and kindness.”

The “All You Wanted” and “Are You Happy Now?” singer alleged Wednesday in a since-deleted tweet that Carney cheated on her with his manager while she “was home with our 6 month old daughter.” (Branch gave birth to Willie Jacquet in February.)

Representatives for Branch and Carney did not immediately respond Friday to the L.A. Times’ requests for comment.

Branch and Carney wed at the Marigny Opera House in New Orleans in April 2019. They met at a Grammy Awards party and started dating through the production of her 2017 pop-rock album, “Hopeless Romantic,” which Carney co-wrote and co-produced.

In addition to Willie, the couple welcomed son Rhys James, in August 2018. The singer also has a 17-year-old daughter, Owen Isabelle, from her 11-year marriage to bass player Teddy Landau. She and Landau finalized their split in 2015.

Carney is currently on the Dropout Boogie tour with the Black Keys. Branch recently debuted the single “I’m a Man.” She is expected to release her next album, “The Trouble With Fever,” on Sept. 16, and begin touring to promote the album on Sept. 15.