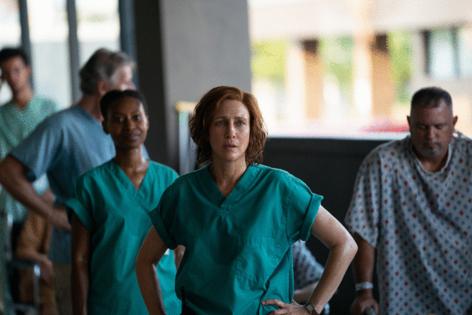 Ryan Murphy originally planned to adapt Sheri Fink's book for his "American Crime Story" franchise. Instead, the daunting project fell to John Ridley ("12 Years a Slave") and Carlton Cuse ("Lost"), and the eight-part series couldn't have ended up in better hands. With the help of a stellar cast, which includes Vera Farmiga and Cherry Jones, the writers offer a stark look into how doctors managed — and bungled — one crisis after another in the wake of Hurricane Katrina. It's more devastating than most big-budget disaster flicks — because it really happened. Apple TV+

Stand-up Chris Estrada tries to find the lighter side of living in L.A.'s South Central neighborhood, mostly by making fun of aging gangsters who get winded just threatening to start a fight. Estrada, whose co-producers include Fred Armisen, plays a social worker who believes in running away from trouble. His ex-girlfriend and ex-con cousin feel he needs to toughen up. What he really needs is sharper jokes and deeper insight. Hulu

'Legacy: The True Story of the LA Lakers'

This 10-part series suggests it's going to separate itself from other Lakers' projects by focusing on former owner Jerry Buss and his children playing out a real-life version of "Succession." But the first six episodes only tease at the family friction, relying instead on story lines already explored in HBO's "Winning Time" and "They Call Me Magic" on Apple TV. Part of the docuseries' hesitation may be because one of the executive producers is Jeanie Buss, the team's current owner and president. Monday, Hulu

Leonardo da Vinci is one of history's most celebrated painters and inventors. He also had a pretty robust sex life. All that wasn't enough for the creators of this drama, which already aired overseas. They've built the series around a fictional murder charge, triggering interrogations from "The Good Doctor's" Freddie Highmore. Purists will be outraged. CW's regular teen audience will be shattered that it's not about Leonardo DiCaprio. 8 p.m. ET Tuesday, CW

New editions of "Untold," the terrific sports anthology series, include this tale about former NBA referee Tim Donaghy's involvement in a gambling ring. The film has a lot to say about the mob, but it's even more revealing when it comes to exposing the power wielded by former commissioner David Stern. Tuesday, Netflix