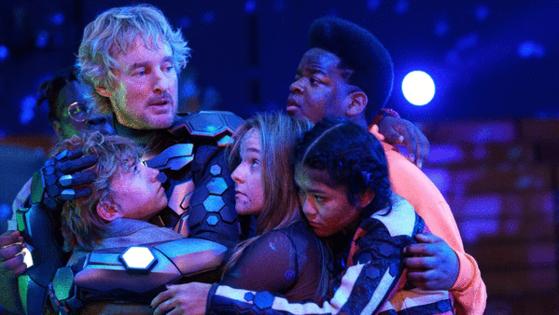 It doesn't pander to teens — ahem, young adults — but rather it meets them where they're at, and it's made with warmth rather than cynicism. That makes it stand out among contemporaries that are either too cool or too out of touch to realize how to talk to kids.

Walker Scobell, recently seen hamming it up alongside Ryan Reynolds in Netflix's teeth-grating "The Adam Project," is put to much better use here as Charlie Kincaid. He's a 14-year-old who is shuffled between the homes of his divorced parents who doesn't understand why his father never has time for him.

When he and his friends — including Berger ("Good Boys'" high-pitch squealer Keith L. Williams), Lizzie (Abby James Witherspoon, Reese's niece) and his crush Maya (Momona Tamada) — discover his father's underground sci-fi man cave, they start to put the pieces together. Turns out Dad (Owen Wilson) is The Guard, a superhero who has helped curb global crime, who has a wealth of neat-o gadgets at his disposal. So at least he has somewhat of an excuse for being absent all the time.

Charlie and his friends help themselves to these supertools and use them to become heroes in their own worlds, throwing heaters in Little League Baseball and cheating on tests. But they soon become targets of Ansel Argon (Michael Peña, game as always), a defense contractor who has been looking to harness The Guard's power source for years.

"Secret Headquarters" is harmless, good-natured fun, and the script by Christopher L. Yost ("Thor: Ragnarok"), along with directors Henry Joost and Ariel Schulman (the original "Catfish") and Josh Koenigsberg, has a welcome silly streak. It has more in common with "Sky High" than it does the Marvel Cinematic Universe, but in a genre that has become way overblown, "Secret Headquarters" is a welcome return to Earth. Pass it on.

How to watch: On Paramount+ Friday