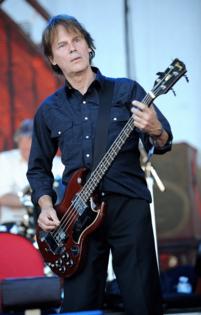 "Our Darryl passed away yesterday afternoon in London," the band tweeted Tuesday. They then quoted fitting lyrics from their song "Love You Till the End," which Hunt wrote: "I know you want to hear me catch my breath/ I love you till the end."

Shane MacGowan, the group's frontman, tweeted his own sentiments soon after the band shared the news.

"I am very very sorry that Darryl has passed on, he was a really nice guy and a great friend and a great bass player," MacGowan wrote. "We will all miss him. May he have a happy state of eternal bliss and bless his family and friends, love Shane."

Hunt was born in 1950 and joined the Pogues in 1986, replacing Cait O'Riordan after she left the group. The band blended English and Irish sounds to create a politically charged, punk-oriented sound. In 1987, they released their hit ballad "Fairytale of New York," which has since been certified four-time platinum (although it has also come under fire for its use of a homophobic slur).

In 2006, former L.A. Times writer Natalie Nichols gave a glowing review of their performance at the Wiltern, which was their first performance in Los Angeles with the band's original lineup in more than 15 years.

"The whiskey and beer flowed, the cheering grew louder, but the atmosphere was one of blissful cutting loose rather than total mayhem," Nichols wrote. "The show reminded folks that freedom isn't something they're granted, it's something they must take for themselves. And at least for a couple of hours they did."

Phil Chevron, the longtime guitarist for the Pogues, died in 2013 at age 56.