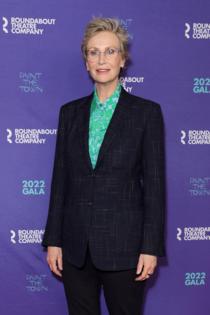 The “Glee” alum, 62, was previously slated to leave the show on Sept. 4, but will now step away Sunday due to a previously planned vacation starting Aug. 15, according to the production.

She was initially scheduled to return to the theater on Aug. 23 and leave for the Creative Arts Emmy Awards on Sept. 1.

“With my long-planned vacation on the books and then the Creative Arts Emmy Awards ceremony ... I will take my final curtain call on Aug. 14,” the Emmy winner said in a statement.

Lea Michele, 35, who starred in “Glee” alongside Lynch, was announced nearly a month ago to be taking over Beanie Feldstein’s starring role as Fanny Brice — originated by Barbra Streisand in 1964.

“As I embark upon my last week in Funny Girl, my heart is filled with gratitude for this wildly talented company led by Beanie Feldstein and our wonderful audiences for keeping theater alive!” Lynch said. “I offer a special thanks to my current scene partner Julie Benko and will be back to see my friend Lea Michele light up the lights.”

Lynch’s newest date of departure is just the latest shake-up to “Funny Girl,” which was previously supposed to see both her and Feldstein stay on through the end of 2022, before they were announced to be concluding their roles on Sept. 25.

Feldstein’s departure date was then moved up to the end of July, which she attributed to the show going “in a different direction.”

Several days after news broke of the change-up, Feldstein posted on social media that she had tonsillitis and was “not allowed” to perform that weekend, until the antibiotics kicked on.

Lynch noted last month that “the only reason” she wouldn’t reunite with Michele on the stage was that the pair felt it was a “really strong idea” for Feldshuh and Michele to “premiere together.”