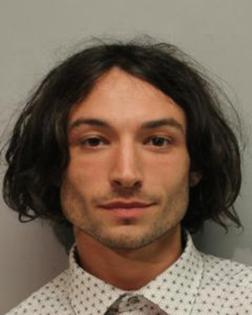 On Monday, the Vermont State Police published a report that details Miller's latest alleged crime. On May 1, officials were notified of a home burglary complaint on County Road in Stamford. Police officials allege that Miller, who has a home in Vermont, stole "several bottles of alcohol" from the home "while the homeowners were not present."

"As a result of an investigation that included surveillance videos and statements, probable cause was found to charge Ezra M. Miller with the offense of felony burglary into an unoccupied dwelling," the report said.

Nearly three months after the incident, police found Miller, who uses they/them pronouns, late Sunday night and issued a citation for them to appear in Vermont Superior Court Bennington Criminal Division on Sept. 26 for an arraignment.

In the report, Vermont police confirmed that the Ezra Miller in question is indeed the "Flash" actor, but their representatives did not immediately respond to the Los Angeles Times' request for comment.

The burglary charge is the latest misstep for the embattled actor. In 2020, Miller was captured on video allegedly grabbing a fan by the throat in Reykjavik, Iceland.

Earlier this year, Miller was arrested twice in Hawaii, including an incident in which they allegedly threw a chair at a woman's head. Miller was also accused of brainwashing and "endangering the safety and welfare" of an 18-year-old in North Dakota.

Allegations against the "Justice League" actor continue to pile up, but seemingly have no sway on Miller's future projects. Miller is still set to star in Warner Bros.'s upcoming "The Flash" film, which is set to premiere on June 23, 2023.