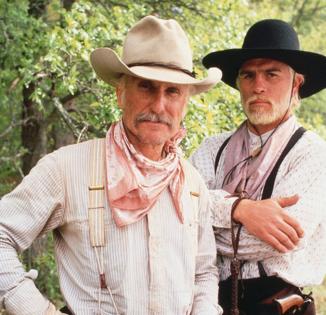 Like many now gray-haired men of my generation, and a few women too, I wanted to be a cowboy. TV made me that way, starting with such early shoot-‘em-up characters as Hopalong Cassidy, the Lone Ranger, Zorro and the Cisco Kid, all closer to cartoons than real people but influential nevertheless.

There were many, many others born of a climate of anti-communism and the Cold War, the clean-cut morality of the Western reflecting the public mood. So popular was the Western that in 1959 and 1960, it was possible, according to Donna McCrohan, author of the TV history “Prime Time, Our Time,” “for viewers to watch every minute of prime time every night of the week and arrange to watch nothing but Westerns merely by turning the dial.”

But Westerns began to fade from TV view during the blood-soaked and gun-filled 1960s. “Gunsmoke,” the longest-running dramatic series in TV history, finally bit the dust in 1975.

And life moved on; adulthood and other diversions arrived.

Until February 1989, when “Lonesome Dove” played for four nights on CBS. It grabbed me and between 36 million to 44 million other viewers each night, captivated by its epic story of a cattle drive from the south Texas town of the title to Montana in the late 1870s.

It was filled with some of the grandest and most compellingly complex characters ever to saddle up, principally those played by Robert Duvall and Tommy Lee Jones as the retired Texas Rangers who lead the drive.

I wrote about it then in the Tribune, mentioning some of its other stars, such as Anjelica Huston, Diane Lane, Danny Glover, Robert Urich and Rick Schroder. I further wrote that these characters lived in “a world that fractures our fantasies: a hero dies, friends are hanged, and the guy doesn’t always get the girl … The film’s great strength is its ability to demythologize the West without damaging its inherent romance and values. … (It) is true and tragic: Violence coexists with virtue, lust with sweetness, brutality with beauty. The West it gives us contains a new set of icons, images, myths and morals — a cohesive vision suited to our more complex and ambiguous age.”

The miniseries won a prestigious Peabody Award and seven Emmys, although, incomprehensibly, it did not take awards for best miniseries (“War and Remembrance” did; remember that?), best actor, best actress or anything in the supporting acting or writing categories.

I was drawn back to the miniseries — available on Hulu and other streaming sites — after rereading, for no other reason than seeing it on my bookshelf, the Larry McMurtry novel on which it was based.