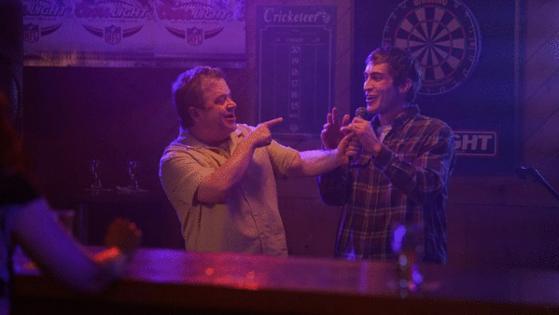 From Waltham, Massachusetts-raised writer-director James Morosini comes “I Love My Dad,” a black comedy of the darkest hue about a father-son relationship that has sunk so deep that father Chuck Green (Patton Oswalt) turns to catfishing to remain in contact with his son Franklin (also Morosini). The father hijacks the identity of a pretty young woman named Becca Thompson (an appealing Claudia Sulewski), who waits tables at a diner in his neighborhood in Maine.

The catch? His son, who lives with his loving mother Diane (Amy Landecker) in Waltham, suffers from manic-depression and has attempted suicide at least once. In fact, when we meet him to the tune of Delibes’ “Flower Duet,” Franklin is taking part in a group therapy session. Franklin’s dad has missed most of his son’s life, including his high school graduation. His father has been so neglectful that Franklin blocks him online and on his phone. At work, Chuck sits in his office trying not to work. One of his coworkers, Jimmy (Lil Rel Howery), is also Chuck’s best friend and fellow karaoke enthusiast.

When Chuck tells Jimmy what he is doing, Jimmy calls it incest. Is it funny? Yes, it is. Does it make you uncomfortable, Yes, it does. But that is the whole point. Relationships, especially father-son relationships, can make us more uncomfortable than any other life experiences we have.

When Franklin and “Becca” are DM-ing each other, the real Becca, whose photos Franklin has seen, appears before Franklin like a spirit summoned by a magic spell. This happily makes Sulewski’s part in the story bigger than it would have been. The digital romance between Franklin and Becca, again, is both charming and funny and also uncomfortable and in fact at times surprisingly cruel. Still, the faux Becca writes a letter of recommendation to a video game company on behalf of aspiring coder Franklin. In an “internet kiss” sequence, we see both Morosini and Sulewski and Morosini and Oswalt kissing. Funny? Yes, it is. Are you OK with a father-son incest panic joke? Although Morosini dedicated “I Love My Dad” to his dad, Morosini is his mother’s surname. His father’s name is Claudio Lichtenthal, and, yes, he once catfished his son.

“I Love My Dad” is a boundary-pushing screwball comedy that strongly suggests its maker has a bright future. Morosini, who looks a bit like a young Marlon Brando, has been a regular cast member on TV’s “Foursome” and “The Sex Lives of College Girls.” He made his directing debut with a comedy about a threesome called “Threesomething.” Oswalt has amusing scenes with Rachel Dratch, who plays Chuck’s sex-crazed boss/girlfriend Erica. In one scene, Chuck sends Erica’s “sexts” to Franklin, pretending they are from “Becca.” Oswalt is convincingly paternal as the fumbling dad. Morosini’s willingness to tap into his darkest fears and desires keeps “I Love My Dad” from collapsing into self-parody. You genuinely want Franklin to find Becca and somehow start a romance with her and not to get hurt, especially knowing he has tried to kill himself. In fact, making someone who has attempted suicide the protagonist of this crazy romantic comedy is Morosini’s boldest touch. It’s a brushstroke that makes everything that happens in “I Love My Dad” darker.

How to watch: Now in theaters and on VOD Friday