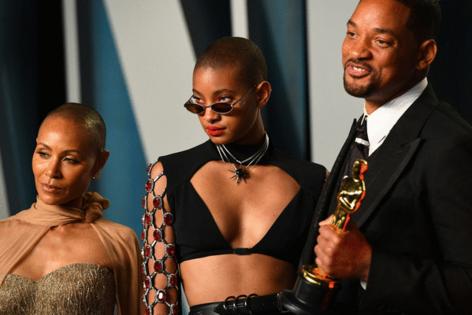 Willow Smith didn’t wilt after her dad slapped Chris Rock at the Oscars.

The 21-year-old singer told Billboard that the public backlash that followed her father, Will Smith, after the March 27 award show didn’t “rock me as much as my own internal demons.”

“I see my whole family as being human, and I love and accept them for all their humanness,” Willow Smith told the music outlet.

Will Smith was banned from the Oscars for 10 years for slapping Rock, who told a joke at the ceremony about the shaved head of the actor’s wife, Jada Pinkett Smith.

The 53-year-old Will Smith has apologized multiple times, including late last month, when he said in a Facebook video, “I’ve reached out to Chris, and the message that came back is that he’s not ready to talk, and when he is, he will reach out.”

Rock then appeared to reference the situation during a comedy set that night in Atlanta, according to CNN.

“Everybody is trying to be a f---ing victim. If everybody claims to be a victim, then nobody will hear the real victims,” Rock reportedly said at the time. “Even me getting smacked by Suge Smith ... I went to work the next day, I got kids.”

Will Smith won the Oscar for best actor for his performance in the tennis biopic “King Richard” shortly after the slap incident.

Known for songs such as “Transparent Soul” and “Meet Me At Our Spot,” Willow Smith is the youngest of Will Smith and Pinkett Smith’s two kids. Son Jaden Smith is also a musical artist.