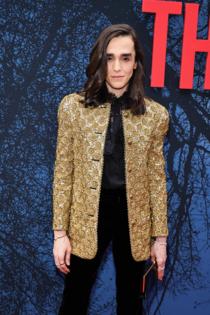 NEW YORK — Darwin Del Fabro is all about queer power.

With the horror film “They/Them” debuting on Peacock Friday, the 25-year-old Brazilian actor and singer wants viewers to feel empowered by their own “queerness and uniqueness” — and use that feeling to change their lives.

“Take me as an example,” Del Fabro, who stars in the film as the mysterious outsider Gabriel, told the Daily News. “I’ve always wanted to be an actor doing an international career here in America, and I’m getting those chances because I’m confident in who I am and [in] my queerness — and that’s my power.”

“They/Them” (pronounced “They-Slash-Them”), the directorial debut of three-time Oscar-nominated screenwriter John Logan, is a queer homage to '80s slasher films, in which the scary fictional narrative runs parallel to the very real horror of LGBTQ conversion.

The film — a mix of the slasher classic “Friday the 13th” and the queer classic “But I’m a Cheerleader” — features a group of young LGBTQ adults arriving at a Camp Crystal Lake-style site run by Owen Whistler (Kevin Bacon) who promises them a “new sense of freedom” by the end of the week.

Working with such seasoned actors was an “amazing” experience for the Brazilian newcomer who’s a “big fan of horror movies,” and who remembers watching Bacon in “Friday the 13th” as a kid. Working alongside him was nothing short of “magical,” he recalled, as well as an incredible learning experience.

“It was just a master class, just seeing [the veteran actors] perform,” Del Fabro told The News, adding that to top it all off, they were all “so nice with everyone in the cast.”

Del Fabro was born in the small city of Santa Maria in Brazil’s southernmost state of Rio Grande do Sul, but moved to Rio de Janeiro as a young child to pursue a career in entertainment.

After his first major role in musical theater, at age 13, he quickly built an impressive resume on the Brazilian stage and also played some memorable characters on television.