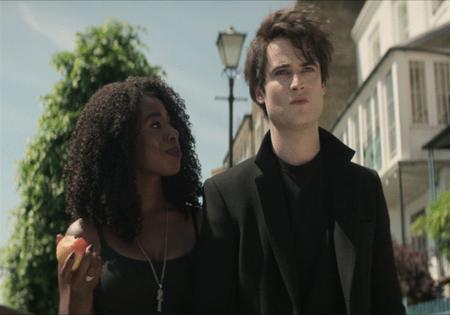 That's not to say Netflix's much-anticipated television adaptation of Neil Gaiman's long-running comic book series is impenetrable to outsiders. Netflix provided the Post-Gazette with all 10 episodes of the show's first season, and it took this critic about an episode and a half to truly get up to speed. To be fair, there are a lot of rules to remember and some trippy visuals that require a bit of acclimation to fully appreciate.

Once the parameters of the world and stakes become clear, though, "The Sandman" settles into a mind-bending adventure featuring breathtaking dreamscapes and the sort of inventiveness Gaiman imbues into everything he creates. Like "American Gods" and "Good Omens," "The Sandman" isn't bound by constraints as mundane as time or space. The sheer amount of imagination on display throughout the show's first season is truly a sight to behold.

The series follows Dream (Tom Sturridge), who after spending more than a century being held captive in the human world by a cult led by Roderick Burgess (Charles Dance), returns home to find his realm in disarray. To restore order, Dream enlists the assistance of dream librarian Lucienne (Vivienne Acheampong) and Matthew the Raven (voice of Patton Oswalt) to retrieve his magical tools from the humans who stole them.

As Dream attempts to regain his power, he comes in direct conflict with Lucifer (Gwendoline Christie), the ruler of hell, and The Corinthian (Boyd Holbrook), an escaped nightmare with zero respect for human life. Dream also ends up having to deal with the unintentional chaos caused by Rose Walker (Vanesu Samunyai), a human who also happens to be a destructive force known as a dream vortex.

Those more familiar with "The Sandman" will probably have strong opinions about how certain elements of Gaiman's original source material were adapted for the small screen. As a total novice, all that really mattered was how what made it into those 10 episodes fit together. The narrative could've used some tighter plotting, but the whole still managed to surpass the sum of its parts.

It didn't seem like there was any context missing that might have cleared up some of the early confusion. Some mythologies are just dense and require a little extra hand-holding. To its credit, "The Sandman" does quite a bit of that while managing to never feel condescending. Even when certain things don't make a ton of sense, the twisted fairy-tale vibe is so enchanting throughout that it's easy to power through the more convoluted story beats.

Half of the season is spent on Dream reclaiming what was stolen from him before the focus is shifted to Dream and his associates' efforts to contain the dream vortex situation. Adapting years of comic-book lore is an unenviable task for any Hollywood project, and this first "Sandman" outing plays like two seasons of television condensed into one. It's all at least uniquely entertaining and sets up some intriguing avenues for a possible Season 2.

Both the complexities of the world and the aesthetic sensibilities on display take a bit of getting used to. Not every idea is executed perfectly, but some of the effects are genuinely stunning and the creative intent behind them is never in doubt. A few of the computer-generated creatures — including the aforementioned Matthew the Raven and the aptly named Mervyn Pumpkinhead (voice of Mark Hamill) — deserve particular praise.

"The Sandman" contains a few wild narrative swings that may require viewers to pause, rewind and watch again to fully grasp what the heck just happened. Most of them have enjoyable enough payoffs at least. There are parts of the season that feel like filler until the story's momentum picks up again, but even those make for charming palate-cleansers.

In June, it was Lizzo using an ableist slang term for “spastic” in the tune "Grrrls." This week, it's Beyoncé ...Read More