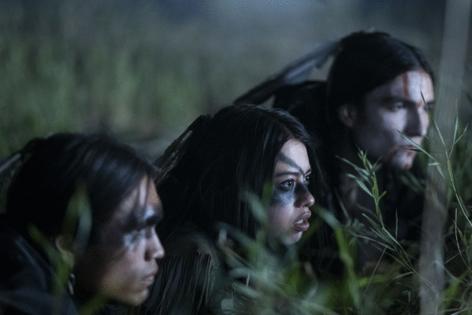 It's a credit to 1987's original "Predator" that 35 years later, we're still dealing with "Predator" movies at all. Since that musclebound, Schwarzenegger-kissed piece of '80s action excellence, there have been three follow-ups and two crossover "Alien vs. Predator" entries, and you'd be hard-pressed to remember a single thing about any of them.

Now comes "Prey," which takes the bones of the original "Predator" and sets the story in the 1700s Comanche Nation. It's a lean take on the "Predator" myth, boiling the story down to its human vs. monster essentials, and if it's the best entry in the series since the first, well, we've already established that as faint praise.

Amber Midthunder ("The Ice Road") stars as Naru, a young warrior who longs to be taken seriously by the members of her tribe but is not because of the same-as-they-ever-were gender politics of the day. Dakota Beavers is Taabe, her brother, who basically tells her to step aside while the big boys go hunting. Naru aims to not only prove herself worthy, but as the superior hunter overall.

She gets her chance when a Predator enters the picture, dropped off by spaceship from the skies above. From where? Why here? Don't ask questions, there are no answers. It's simply time for some gruesome kills as the Predator (played by 6-foot-9 former basketball player Dane DiLiegro) stalks his prey, both members of the animal kingdom (poorly CGI'd, unfortunately) and the human warriors of Naru's tribe.

A game of cat and mouse develops between Naru and the Predator, whose crystallized translucence is rendered against the sprawling nature of the open plains; it's like the Predator was plopped into the middle of Terrence Malick's "The New World." Meanwhile, European trappers show up and suggest a different kind of predator-prey dynamic, but the symbolism only lasts long enough for them to become more objects to be gored.

Dan Trachtenberg ("10 Cloverfield Lane") directs, while Patrick Aison's script makes sure to copy and paste at least one iconic line of dialogue from the original "Predator." Midthunder has a strong presence and helps to subvert the series' heavy testosterone levels, but "Prey" doesn't push the "Predator" tale forward in any significant ways. It just proves it's open to retelling.

How to watch: Hulu