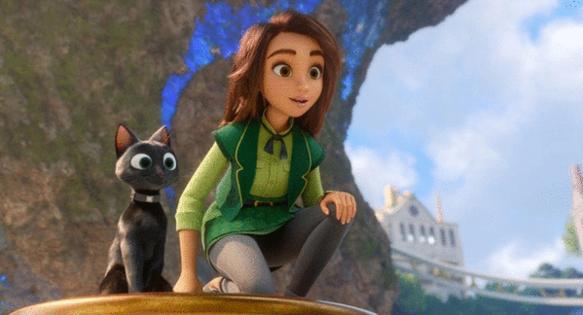 Hopefully the baffling "Luck," in all its inscrutability and forced whimsy, stops filmmakers from attempting to take on those other subjects.

This impossibly complicated animated fantasy undoubtedly started in a writer's room somewhere with screenwriters Kiel Murray, Jonathan Aibel and Glenn Berger trying to explain the origins of luck. Director Peggy Holmes (the "Little Mermaid" prequel "Ariel's Beginning") then plunges us into an underground world of leprechauns, unicorns, pigs and dragons, where both good and bad luck are manufactured and spin in tandem with one another and ultimately help keep the world in balance. Sure, of course.

Eva Noblezada voices Sam Greenfield, an 18-year-old who was raised in a series of orphanages, never having found her "forever family." She's now on her own, and her streak of bad luck manifests itself in a series of stumbles and follies.

But she's kindhearted and sweet, and her fortune changes when she comes across a lucky penny left behind by a black cat, Bob (voiced by Simon Pegg). Bob exposes Sam to the secret world of luck, where she meets the makers of happy accidents and the like, including Babe (voiced by Jane Fonda), luck's CEO, because luck is somehow a company?

It's fruitless to try to follow the film's line of logic and better to take it on a strictly surface level: Sam is nice. Bob is cute. Madonna's "Lucky Star" is deployed (twice!), and there are several gratuitous plugs for Apple products (fitting, given it's an Apple movie). If you're looking for much more from this mystifying adventure, well, good luck with that.