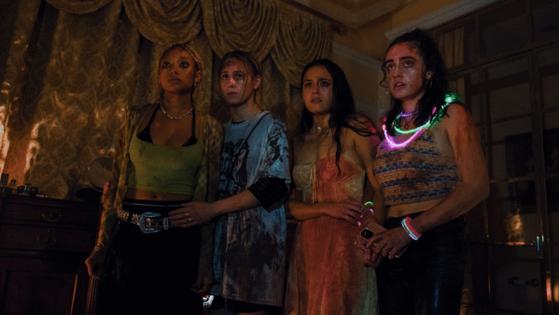 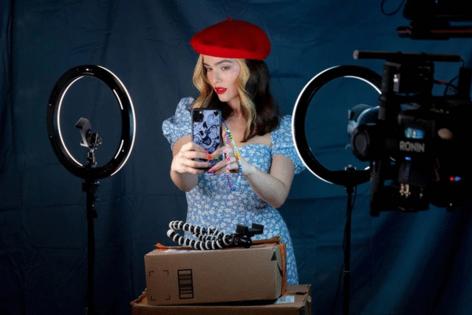 LOS ANGELES — Here's a Hollywood math problem for you: Feature filmmaking as we know it is well over 100 years old. Members of Generation Z, defined by Pew Research Center as those born between 1997 and 2012, are now between 10 and 25. How long will it take the entertainment industry to bridge the gap?

For a number of summer movies, the answer isn't just "not long" — it's "now." "Bodies Bodies Bodies," directed by Halina Reijn from a screenplay by Sarah DeLappe; "Sharp Stick," written and directed by Lena Dunham; and "Not Okay," written and directed by Quinn Shephard, are all part of a spate of recent films to grapple with how the medium can engage a generation versed in a new visual language and culture. Their 20-something, predominantly female characters are defined to a significant extent by the way they define themselves online, a mix of jokey memes, earnest questioning, engaged activism, real horniness, performative fakeness and the actual search for an authentic sense of self.

'Wi-Fi is our oxygen'

In "Bodies Bodies Bodies," based on a story by viral "Cat Person" author Kristen Roupenian, a group of mostly wealthy, mostly college-age friends meet at one's family estate to party hard during an impending storm. They decide to play the game that gives the film its title — a variation on "Mafia" or "Werewolf" in which players try to deduce who among them is hiding information — when the power goes out and people start to die actual violent deaths, one by one. The friends turn on each other, and the film becomes a biting satire on class and privilege, all mediated by new technology, the language of progressive politics and youth culture, and Gen Z identity itself.

"This is just the best age group to examine human behavior," said Reijn, who as an actress was a longtime collaborator with the celebrated theater director Ivo van Hove. "When the power goes out and the Wi-Fi goes out, they change. The animal comes out. It's like the Wi-Fi is our oxygen. Wi-Fi out, demons in.

"They have so much info in their hand. Literally in their hand, and that makes you feel like they know everything," Reijn, 46, continued. "My characters are almost intellectual bullies, but a lot of the words they're using, they haven't lived. They say 'trigger' and 'anxiety' and 'ableist' and 'body dysmorphia' and 'mental illness.' They have all these things in their mind, but have they actually experienced them?"

Dunham launched to fame in no small part by exploring her own life as a 20-something and the lives of those around her with her breakthrough feature "Tiny Furniture" and the HBO series "Girls," for which she was nominated for eight Emmy Awards. "Sharp Stick" is the first feature film Dunham has directed in more than 10 years, meaning she now has some distance between herself and some of the characters she is depicting onscreen.

"Instead of documenting my friends, it feels like I'm like 100, trying to do sociological research," said Dunham, who at 36 is squarely of the millennial generation. "A lot of the movie did come out of the fact that during the height of the pandemic, I discovered TikTok and was spending an enormous amount of time watching this incredible plethora of young people find this new way to express their voice. And I am both in awe of it and so glad that I didn't have access to it when I myself was that age."

"Sharp Stick" follows Sarah Jo (Kristine Froseth), a 26-year-old virgin living with her mother Marilyn (Jennifer Jason Leigh) and sister Treina (Taylour Paige). Dunham plays Heather, a pregnant 30-something struggling to hold her life together in the face of her husband Josh's serial philandering. After Josh (Jon Bernthal) has an affair with Sarah Jo, caregiver to their special needs son, Sarah Jo sets off on a journey of self-discovery by having sex with men she meets on the internet.

"There's so much that I love about it and so much I don't understand about it," Dunham said of exploring online culture again. (Dunham, who does not control her public social media accounts, created a secret TikTok account during the pandemic — the first time in a while she had actively used social media.) "I think the thing that was most important to me was to come at it from a place where I wasn't like the old granny saying, 'The internet's ruining everything!' whether it's TikTok or the way that people engage with porn and sex online. I wanted to do it from a place that wasn't a judgmental parody but was instead just sort of meeting these people where they are and understanding what could be important to them and their self-expression about using those tools."