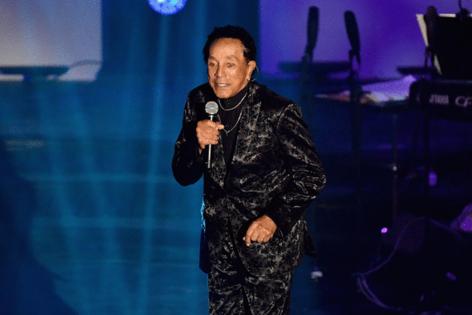 There is a very sound reason Motown music legend Smokey Robinson doesn't perform "The Impossible Dream," the classic song of hope and self-affirmation from the 1965 Broadway musical, "Man of La Mancha."

The singularity of his career — first as a staff songwriter at Motown Records and the leader of Smokey Robinson & The Miracles, then as a solo artist — has long been a matter of record. Or, as Paul McCartney once described Robinson's impact on the early Beatles: "Smokey Robinson was like God in our eyes."

The fabled English band often performed the Robinson-penned Miracles' classic "You Really Got a Hold On Me" and featured their version on "The Beatles' Second Album" in 1964.

Some of the many other gems Robinson wrote or co-wrote include The Temptations' "Get Ready" and "My Girl"; Marvin Gaye's "Ain't That Peculiar" and "I'll Be Doggone"; and Mary Wells' "My Guy" and "You Beat Me to the Punch." Among his other credits are The Marvelettes' "You Don't Mess With Bill" and "The Hunter Gets Captured by the Game"; The Four Tops' "Still Water (Love)"; and The Contours' "First I Look at the Purse," in which the six-man vocal group declares in song that they have only one requirement for their ideal woman: money.

Then there's the slew of hits Robinson made with The Miracles that have been embraced by several generations of listeners. The list includes "The Tracks of My Tears," "I Second That Emotion," "Tears of a Clown," "Going to a Go Go" (which was later covered by the Rolling Stones) and "Ooh Baby Baby" (which in 1978 became a Top 10 hit for Linda Ronstadt).

"I always want to start with a good song," Robinson, a Detroit native, said.

"I was mentored by (Motown Records founder) Berry Gordy and he stressed the importance of always wanting to have a good song right at the start. I want to write songs that, if I'd written them 50 years before now, today, or 50 years from now, it will mean something to you. When I start to write a song, I hope it's a hit."

Robinson recently completed a new album that he hopes will be released later this year. He is two songs away from completing a Spanish-language album.

The first episode of HBO Max's "Rap S—" follows two friends — once estranged, now reconnected — on any and every social media platform, the camera swinging and a record button sitting at the bottom of the screen. ...Read More

“This is not...Read More

Melanie Lynskey started talking about herself as a character actor very early on, she said in a recent interview — possibly because deflecting the spotlight was easier than having makeup and costume people constantly ...Read More

It’s been quite a journey since four boys from a quiet Colorado mountain town had to figure out why one of them had alien technology embedded inside of him after being subjected to probes by extraterrestrials a quarter ...Read More

CHICAGO — You’ve likely heard this before, or felt it in your bones, but it’s horrifying, debilitating and worth repeating, especially right now, as we head into a political season: At least half of this country ...Read More