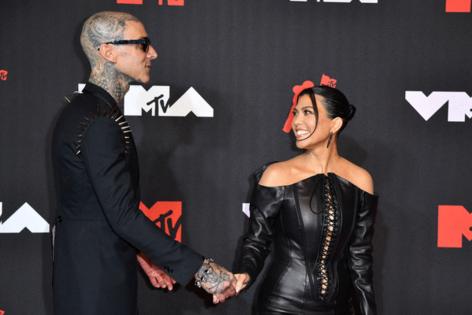 In an Instagram story Saturday, Barker, 46, said he was feeling "much better" after a "life threatening" bout with pancreatitis.

"I went in for an endoscopy Monday feeling great. But after dinner, I developed excruciating pain and have been hospitalized ever since," the Blink-182 drummer wrote. "During the endoscopy, I had a very small polyp removed right in a very sensitive area, usually handled by specialists, which unfortunately damaged a critical pancreatic drainage tube. This resulted in severe life threatening pancreatitis."

He concluded: "I am so grateful that with intensive treatment I am currently much better."

It was previously reported that Barker's pancreatitis was the result of a colonoscopy, not an endoscopy. An endoscopy "is a procedure used to visually examine your upper digestive system with a tiny camera on the end of a long, flexible tube," according to the Mayo Clinic.

Kardashian also weighed in Saturday about the "scary and emotional week" she has had.

"Our health is everything and sometimes we take for granted how quickly it can change," she wrote in a separate Instagram story.

"I am so grateful to God for healing my husband, for all of your prayers for him and for us, for the overwhelming outpouring of love and support. I am so touched and appreciative," wrote Kardashian, 43, who married Barker in May in an elaborate ceremony in Portofino, Italy, and can be seen in the Hulu reality series "The Kardashians."

She thanked the "specialists, doctors and nurses at Cedars Sinai for taking such wonderful care of my husband and me during our stay."

"It's crazy how sometimes words could never truly express the gratitude or feelings I have inside of me," she said, then shared a quote she attributed to the Persian poet Rumi: "I closed my eyes and spoke with you in a thousand silent ways".

Barker was taken to West Hills Hospital and Medical Center, transferring later to Cedars-Sinai Medical Center in L.A. Photos published by TMZ showed Barker in a stretcher with Kardashian by his side.

Barker has faced other health scares. In 2008, he survived a plane crash that killed four people and left him with burns over most of his body. He was also hospitalized in 2018 with blood clots, according to People.