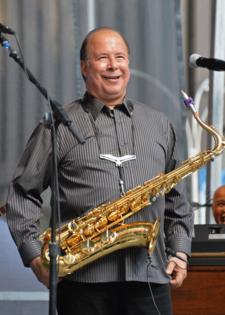 Since debuting in 1968 in Oakland, the brassy soul, funk and R&B band has released 29 albums — including six live concert recordings — and performed countless times with at least 49 different lineups of musicians. More than a dozen lead singers have passed through the ranks in that time.

One of the group's first concerts was as the opening act for Jimi Hendrix at the Berkeley Community Theatre. That was shortly after legendary concert promoter Bill Graham had signed Tower of Power to his Fillmore Records label, which in 1970 released the band's debut album, "Easy Bay Grease."

In the intervening years, Tower of Power has created a repertoire that includes such enduring favorites as "You're Still a Young Man," "Down to the Nightclub (Bump City)," "So Very Hard To Go," "Squib Cakes" and "What is Hip?" Fans can expect to hear most of these when the band performs in San Diego Thursday at The Rady Shell at Jacobs Park.

As might be expected for a band now past the half-century mark, Tower of Power has outlived some of its key members. Guitarist Bruce Conte died last year, bassist Francis "Rocco" Prestia died in 2020, and trumpeter Mic Gillette died in 2016.

A number of Tower of Power alums have achieved success after their tenures in the band. Some of the most notable include keyboardist Chester Thompson, who joined Santana in 1983 and has been a key member ever since; tenor saxophonist Lenny Pickett, who since 1995 has been the musical director for the house band on TV's "Saturday Night Live"; and Scottish-born tenor saxophonist Richard Elliot, who lives in San Diego's North County, has been a smooth-jazz mainstay for several decades.

A career first, in San Diego

Yet, for all its accomplishments, there is at least one thing Tower of Power has never done in its 53 years.

"We have never played with a symphony orchestra before," said tenor saxophonist and periodic singer Emilio Castillo, one of the band's co-founders.