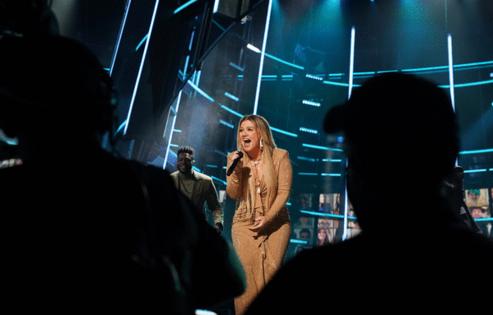 Since her marriage has been gone, Kelly Clarkson’s been struggling with the words to say.

The “Since You Been Gone” singer and “Kelly Clarkson Show” host, 40, is reflecting on her 2021 divorce from talent manager Brandon Blackstock — the father of her two kids — and how that’s affected the way she approaches her forthcoming music.

“My label I keep having talks with because I’m just not ready to release my album. I’ve never had something so huge happen in my life in a way where I’m like, I just don’t know how to quite navigate it, and especially when it’s not just me. So I’m having such a hard time with the album,” Clarkson said on Wednesday’s episode of “The Global Chart Show with Brooke Reese.”

That, she said, is why she’s released her new EP of covers, “Kellyoke,” as a “bridge project” to hold over fans.

As for the new album of original songs, Clarkson called it “the hardest thing to navigate” in the wake of her split from 45-year-old Blackstock, with whom she shares daughter River, 8, and son Remington, 6. Clarkson was also stepmom to his two children from an earlier marriage.

“It’s one of those things where I’m a human, I’m going through something huge — obviously, everybody knows, a big huge divorce I went through. And it’s been like two years and not easy with kids, especially. That makes it just a whole different dynamic,” she told the show. “Forget if I’m famous, in the limelight, my outlet in general is just writing.”

Because she wants to “be completely honest” but also take the other people involved into consideration, despite her experience playing out in public, Clarkson said she feels akin to “a vessel for this.”

“I’m just navigating what I’m comfortable with releasing,” she said. “It’s just a hard thing to navigate. It’s coming. I just gotta get my crap together.”

Clarkson filed for divorce in June 2020. She and Blackstock — who tied the knot in 2013 — finalized their divorce in March of this year.

Prior to last year’s Christmas album, Clarkson’s 2017 album “Meaning of Life” was her most recent.