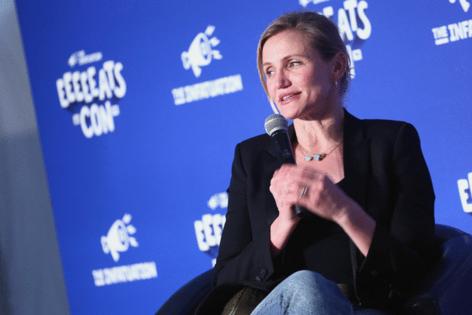 Netflix announced Wednesday that Diaz is "officially un-retiring" to star opposite Jamie Foxx in an upcoming movie for the streaming giant. Aptly titled "Back in Action," the project will mark the actor's first feature film role since 2014.

To help Diaz transition out of retirement, Foxx surprised his co-star with a phone call from none other than Brady — who recently and famously returned to the Tampa Bay Buccaneers less than two months after announcing his retirement from the NFL.

"Cameron, whaddup? It's Foxx," the "Spider-Man: No Way Home" actor says in a recording of their conversation that he shared Wednesday on social media.

"Thanks for calling," Diaz replies. "I'm so anxious right now. I'm, like, pacing the room."

After telling Foxx she's "excited" to return to acting, Diaz admits on the tape that she doesn't "know how to do this." Luckily for the "Charlie's Angels" star, Foxx reveals he has "somebody on the other line who can help."

Enter Brady, happy to offer his services as an expert un-retiree.

"I was talking to Jamie, and he said you need a few tips on how to un-retire," Brady tells Diaz on the call. "I'm relatively successful at un-retiring."

The audio clip ends with Foxx hopping off the line to let Diaz and Brady "chat it up."

"Cameron I hope you aren't mad I recorded this, but no turning back now," Foxx captioned his Wednesday post. "Had to call in the GOAT to bring back another GOAT. @CameronDiaz and I are BACK IN ACTION - our new movie with @NetflixFilm. Production starting later this year!!"

It's unclear if Brady — who signed a production deal with Netflix this spring to develop comedy specials for the streamer — is involved with the project. The action comedy film will be directed by Seth Gordon and co-executive produced by Foxx, who previously worked with Diaz on 1999's "Any Given Sunday" and 2014's "Annie."

"Only [Foxx] could get me back in action!!" Diaz wrote on her Instagram Story. "I can't frickin wait it's gonna be a blast."

In a 2020 joint interview for Vanity Fair, Diaz explained to Gwyneth Paltrow why she chose to step away from Hollywood, citing long hours on set and personal relationships she "had to repair."

"It's so intense to work at that level and be that public and put yourself out there," Diaz said.

"There's a lot of energy coming at you at all times when you're really visible as an actor and doing press and putting yourself out there. I'm sensitive to some energies and not others, but I do get the overwhelming energy of the attention being put towards me. I stopped, I really looked at my life, and I saw what I had been [missing]."