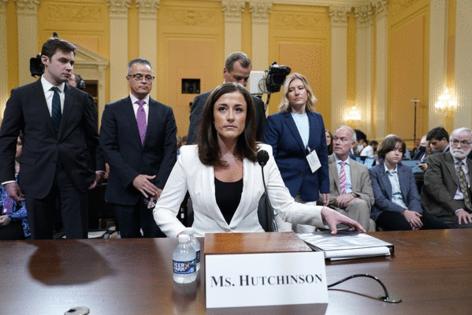 Hosts Seth Meyers, Jimmy Fallon, Trevor Noah and Stephen Colbert all spent much of their monologues recapping Hutchinson's remarks on former President Donald Trump's behavior during the Jan. 6 insurrection at the U.S. Capitol. While guest-hosting "Jimmy Kimmel Live!" this week, comedian Chelsea Handler also weighed in on the political spectacle.

"We learned that on Jan. 6, Trump knew the crowd had weapons, that he tried to get the metal detectors removed because they're 'not here to hurt me.' He got mad at [former Attorney General] Bill Barr over lunch and threw a plateful of ketchup at the wall, and then — when he found out that his limo was not going to the Capitol — he lunged for the throat of a Secret Service agent and tried to grab the steering wheel. I mean, isn't that unreal? Who has ketchup at lunch?"

According to Hutchinson, Trump allegedly attacked Secret Service agent Robert Engel from the back seat of a limousine when Engel refused to drive him to the Capitol during the riot. When he didn't get his way, Hutchinson recalled, Trump allegedly "said something to the effect of, 'I'm the f— president, take me up to the Capitol now'" and reached for the steering wheel.

"And when grabbing the steering wheel didn't work," Handler said on "Kimmel," "he grabbed the car by the p—."

"Immediately, the agents were like, 'Who the hell let him out of his car seat?'" Fallon joked on "The Tonight Show." "How did he reach the steering wheel? Always good when you need another Secret Service to protect the Secret Service."

"You gotta admit, though, fighting your own Secret Service agents is kind of genius on Trump's part," Noah said on "The Daily Show."

"Because he's hitting the one person who can't hit back. I mean, they can punch back, but then they've gotta jump in front of their own punch. ... Not to victim-blame, but this is on the Secret Service. You had four years to Trump-proof that vehicle. You knew who you were dealing with. There should have been a toy steering wheel in the passenger seat the whole time."

Hutchinson also claimed that Trump became angry after learning that Barr told the Associated Press that the Department of Justice had found no credible evidence of widespread voter fraud in the 2020 presidential election. In a fit of rage — or a "Trump tantrum," as Noah put it — the former president allegedly threw his lunch against a wall, leaving behind a splatter of ketchup.

"I mean, her description is so detailed, I think you can go in and find where that ketchup stain was," Colbert said on "The Late Show. "They should put that on the White House tour. Just have a little plaque on the wall that says, 'Here the 45th president lost his lunch.'"