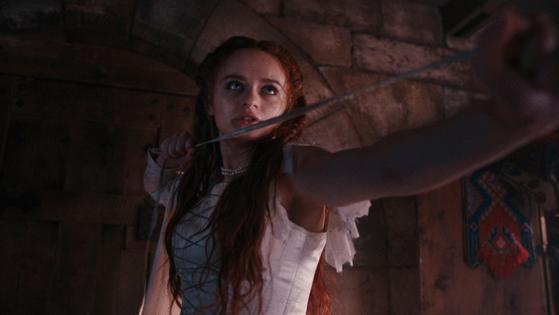 Joey King channels John McClane in this fast-paced fairy tale, tailor-made for teens who can handle a little screen violence. King, best known for "The Kissing Booth" flicks, plays a spunky version of Rapunzel, descending from her prison in a medieval tower through a flurry of swordplay, fist fights and corny quips. This is no damsel in distress. Some of the scenes get a bit repetitive — how many different ways can you stab a smug guard? — and Dominic Cooper's villain isn't very threatening. But the movie's core audience won't care. Expect 14-year-old viewers to stop asking for a pony and start begging for karate lessons instead. Debuts Friday, Hulu

'Father of the Bride'

Although it drew inspiration from the novel that became movies of the same title with Elizabeth Taylor (1950) and Steve Martin (1991), it's a whole new story in a whole new milieu. Andy Garcia, whose voice conveys heartbreak better than anyone's, plays the title character, a wealthy Cuban American estranged from his wife (Gloria Estefan) and trying to keep a handle on his daughter's out-of-control marriage into an even richer Mexican American family. The luxe Miami locations are spectacular, the cast is absurdly gorgeous and a few surprises helped make it the streaming service's most popular movie. HBO Max

Rowan Atkinson, the mastermind behind "Black Adder" and "Mr. Bean," plays a house sitter whose battle with a stubborn bee triggers one mini disaster after another. It's basically a live action version of Wile E. Coyote vs. the Road Runner with each episode running about as long as a typical cartoon. This isn't one of Atkinson's most ambitious projects but it's packed with enough slapstick laughs to give you a buzz. Netflix

This 2017 Ryan Murphy production, making its streaming debut, is all about the rivalry between Bette Davis and Joan Crawford. But it's also a showcase for two modern-day screen legends. Susan Sarandon and Jessica Lange put on a master class in how to do camp without looking like you're auditioning for Ed Wood. But this is much more than a costumed catfight. The eight-part series has a lot to say about ageism, sexism and the indignities visited upon women in Hollywood. Drops Friday, Hulu

If the end of Pride Month is leaving you hung over and weary, why not attend this virtual party? It's a fun-if-ragged portrait of the title troupe, a "queer male burlesque" group in San Francisco. We go behind the scenes of the bawdy, frequently unclothed shows, which emphasize positive attitudes about bodies and sex. On-demand services