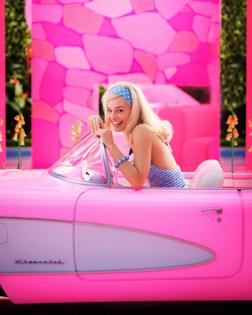 LOS ANGELES — Oh. Em. Gee. The “Barbie” movie doesn’t come out until next summer, but people are already freaking out while the Warner Bros. feature — starring Margot Robbie as Barbie and Ryan Gosling as Ken — is filming at Venice Beach.

The fantastic plastic couple were spotted out for a skate in coordinating Day-Glo outfits Monday as film cameras rolled. The Venice Beach bike path has never looked so good.

“Barbie” isn’t expected to hit theaters until July 2023, but the buzz is already building.

Here’s what we know so far about the live-action film adaptation of the iconic doll that Mattel debuted in 1959.

This one is a “no duh”: The first look at Barbie came at CinemaCon 2022 in April — yep, the conference where Olivia Wilde was served with custody papers in front of a live audience.

That sneak preview showed Robbie in a coordinated blue spring outfit complete with matching headband, peering out of a familiar pink convertible in front of a hotter-pink background.

The couple’s beach-skating outfits, meanwhile, can be seen above, in all their neon glory. Pink, purple, red, green — and where does one get that nifty fanny pack that Gosling’s sporting? Might be everywhere, come next summer.

Director Greta Gerwig teamed up on the screenplay with filmmaker and life partner Noah Baumbach, and the strength of the script is apparently what lured Simu Liu to audition.