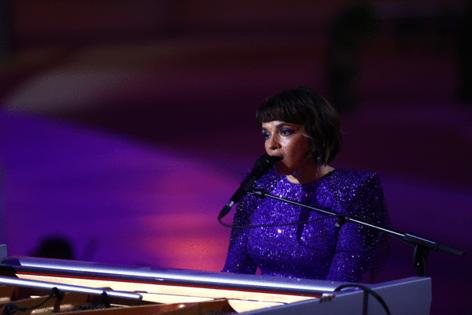 The album went on to sell more than 27 million copies worldwide and earned Jones six Grammy Awards. It was a swift and heady rise to prominence for the then-23-year-old troubadour.

"It was a whirlwind! And it was definitely turbo-speed," Jones told the San Diego Union-Tribune.

In this bonus Q&A, Jones reflects further on her music, her career, her rise to prominence and why she liked to shop at Target when visiting family in Encinitas in San Diego's North County.

Q: Do you still have your alto saxophone? And, if so, when is the last time you played it?

A: It's in my closet and I probably haven't played it since ninth grade. So, I'm afraid to open it, but someday...

Q: How cold was it on top of the Empire State Building in January when you and your band performed The Beatles' "Let It Be" and "I've Got a Feeling?"

A: It was freezing! I don't know how we got through that, but the recording sounds so good. We actually did it over Christmas when I was doing all the (videos) for my Christmas record.

Q: Was playing on top of the Empire State building inspired by The Beatles having done their last performance in January 1969 on the roof of Apple Records in London?

A: I think that started the whole thing. I wasn't the one who planned it; it was was a record company idea. And, at the last second, I realized they couldn't get a piano up the Empire State Building's elevator! So, we had a vintage Wurlitzer electric piano, which I loved. But when we got up on top of the building, there was something about antenna (frequencies) and we couldn't use it.