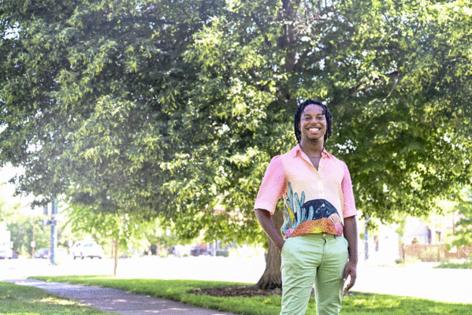 DENVER -- Nneka Uwudia Bradford’s venture into Denver’s LGBTQ community often resulted in the 29-year-old being the only Black person in the room.

Last year during Pride, Uwudia Bradford heard about a queer cookout exclusively for people of color hosted by the Denver Black Queer Collective.

Being around a group of queer, Black people made Uwudia Bradford realize she had never been in a space surrounded by people like her, and the safety and joy she felt began healing a wound she didn’t realize was aching in the first place.

“It feels like such a sacred space because I never had just a big group of Black, queer peers,” Uwudia Bradford said.

Jacob Smith, 25, started the Denver Black Queer Collective in February 2021 after searching for a Black, queer community in Denver and coming up short. Due to the pandemic, the Collective started out building community through online events and has since expanded to in-person gatherings — to celebrate, to converse, to support and learn.

Through word-of-mouth and a focus on building one-on-one relationships among members, the Collective has grown to about 400 Black, queer Coloradans finding friendship and creating the support systems they’ve always wanted.

Smith hopes the Collective is a reminder that even within marginalized communities like Denver’s LGBTQ scene, there is room to diversify and do better by the different kinds of people who make up those spaces.

“We can’t have collective power unless we have meaningful relationships,” Smith said.

One practice Smith instated to foster those relationships: when someone comes to an event, they commit to a one-on-one meeting with someone else there. Smith pointed to this unique initiative as one of the Collective’s keys to success.