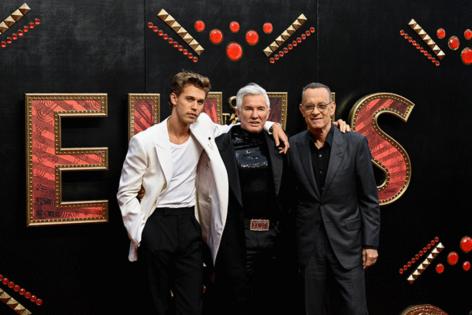 During the opening moments of “Elvis,” Baz Luhrmann’s razzle-dazzle romp through the life and music of Elvis Presley, I couldn’t stop staring at one actor in particular. I’d entered the theater knowing almost nothing about the movie or who was in it, and although I had some idea of whom I was looking at, I couldn’t be entirely sure. That’s not at all a common response to seeing Tom Hanks onscreen, but then, was this really Hanks, so familiar in countenance and yet so discomfiting in effect? Eventually, I had to conclude — reluctantly — that it was indeed him, emoting from beneath pounds of ruddy latex and jabbering in an overblown accent traceable to somewhere in the vicinity of the Netherlands.

The occasion for all this artifice is a relatively rare (for Hanks) display of onscreen villainy. He plays Col. Tom Parker, the Dutch-born carnival barker-turned-music impresario who managed and exploited Presley for years. History takes a dim view of the man, and so does “Elvis,” which topped the weekend box office and impishly casts Parker in the role of indignant, none-too-reliable narrator.

In swirling flashbacks, we see Parker cajoling Elvis (Austin Butler) into an exclusive contract, shaping the direction of his career and manipulating his image to suit the censors. Most egregiously, he traps Elvis in a seven-year Las Vegas hotel residency that will become an early grave, all so that Parker can pay off his gambling debts, fund his extravagant lifestyle and keep some personal skeletons in the closet.

This is an intriguingly off-center perspective from which to tell the story of one of the 20th century’s greatest entertainers. It also swiftly wears out its welcome and its insight. I try to steer clear of hyperbole, but since Luhrmann’s filmmaking is nothing if not hyperbolic, an exception seems fitting: Offhand, I can’t remember Hanks delivering a more grating, more voraciously attention-grabbing performance than the one he gives here. And that’s a shame, because when the camera isn’t on him — when it turns the spotlight on its ostensible subject and lets the music, the lighting and the rhinestone-studded production design seize hold — “Elvis” does become something grander than its missteps. The passion and energy of Butler’s performance come into focus, and the flamboyant excesses of Luhrmann’s filmmaking merge, rousingly, with Presley’s own.

If the tragedy of Elvis the man is that he never breaks free of Parker, the tragedy of “Elvis” the movie is that it never does either. Even as it villainizes Parker (who protests, unconvincingly, that he’s not really a villain), Luhrmann’s film proves curiously indulgent of him and of Hanks’ overweening performance. It doesn’t help that sticking any actor in a fat suit and burying them with unflattering prosthetics has become one of Hollywood’s lazier clichés, whether the character in question is a Batman villain or a historical figure.

And Hanks, who’s made unvarnished, down-to-earth honesty something of a career specialty, feels uniquely ill served by such gimmickry. It’s a rare miscalculation, I think, from a star who’s done some of his finest, most interesting and often unheralded work over the last decade, to the point where he seems in genuine danger of being underappreciated.

In other words, I come to praise Tom Hanks, not bury him. I’m even notionally sympathetic to the idea that his “Elvis” performance works in context, that it makes you recoil to exactly the degree that it should. Of course he comes across as a malignant parasitic growth, because that’s exactly what Parker was. Some might even conclude that Hanks’ fabled onscreen decency is deployed and undermined in a productively subversive way; perhaps we’re meant to look upon Parker and see, trapped beneath all those sneering pancake layers, a kernel of relatable Hanksian humanity. (I am consciously avoiding the word “everyman,” a go-to Hanks descriptor that, as my Times colleague Mary McNamara has persuasively argued, has become reductive to the point of meaninglessness.)

One thing’s for certain: Parker is not the kind of character we often associate with Tom Hanks, and I suspect that’s partly why he wanted to play him. If Hanks has long been aware of the blessings and limitations of an unshakable nice-guy persona (“I’m not a chameleon,” he said in a 1992 Times interview, with the debacle of “The Bonfire of the Vanities” not too far behind him), he has also showed, over the years, a gentle refusal to let that persona define him.

Playing the bad guy has never come naturally to Hanks, though it could be rewarding to see him try, whether he was embodying the noblest of a bad lot in the 2002 gangster melodrama “Road to Perdition” or delivering unctuous comic villainy in the Coen brothers’ “The Ladykillers” (2004). In the context of a career often overshadowed by flattering if reductive comparisons to Jimmy Stewart, a wild swing like Col. Parker, love him or hate him, makes a kind of sense.

And there is precedent in Hanks’ career for both Parker’s over-the-top wickedness and Luhrmann’s prosthetic-laden artifice. In a way, this Parker might make more sense popping up in “Cloud Atlas” (2012), in which Hanks (like many of his co-stars) played six different characters, differentiated by wigs, noses, accents, languages, vocal inflections and other gaudy externals. The performances, like the movie itself, are a mixed but ambitious bag, and at their best they suggest something of what must have drawn Hanks to Hollywood in the first place: not the chance to play paragons of working-class virtue, but rather a sense of acting as play, as a form of liberating, exhilarating make-believe.