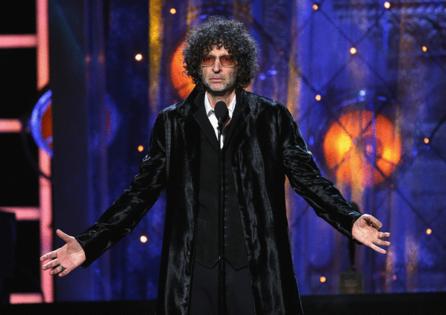 Howard Stern started his SiriusXM show on Monday by joking he was going to “party like it’s 1959″ in light of the Supreme Court’s Friday decision to overturn Roe v. Wade

The shock jock and his co-host Robin Quivers went on to suggest that right-leaning Supreme Court Justice Clarence Thomas, as a Black man, may want to rethink moving the nation back to more conservative times.

“I hope they roll it all the way back to slavery and then they slap him on a plantation,” said Quivers, who is also Black.

Stern and Quivers also noted that Thomas is married to a white woman, which was not legal throughout the U.S. prior to the Supreme Court’s 1967 ruling in the case of Loving v. Virginia.

“The whole mess we’re in with that lightweight, Clarence Thomas, who’s been sitting there like Darth Vader, dormant, waiting for other kooks to join the Supreme Court and waiting and waiting through the decades,” Stern said.

Thomas was sworn into the Supreme Court in 1991. He held a minority opinion in his opposition to abortion rights that had been on the books for nearly a half-century until last week. Brett Kavanaugh, Neil Gorsuch and Amy Coney Barrett, all recently appointed to the court by former president Donald Trump, joined the 74-year-old conservative in turning back the clock.

Stern, 68, joked he might have to run for president simply to eliminate the Electoral College that allows conservative presidents who lose the popular vote to appoint “deranged,” theocratic Supreme Court justices that don’t reflect majority opinions.

“The country is not bad,” Stern said. “This Taliban government that has gotten in, is by the minority.”

The NAACP said last week that “there is no denying the fact that this is a direct attack on all women, and Black women stand to be disproportionately impacted by the court’s egregious assault on basic human rights.”

A 2021 Duke University study concluded Black women could see “the greatest increase” of maternal deaths — an escalation of 33% — if abortion is made illegal nationwide. The court’s ruling Friday leaves abortion rights to be decided at the state level. Civil rights groups including the ACLU expect right-wing anti-abortion activists to push for a national ban.