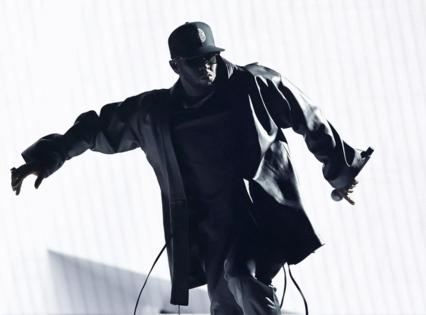 It was clear the night belonged to Diddy at the BET Awards on Sunday.

Up and down the red carpet, friends, collaborators and celebrities (some of whom weren’t born when Diddy dropped his debut single in 1997) cited his tribute performance as what they were most excited to see, praising his indefatigable work ethic and his list of accomplishments.

But going into the show, Lil Nas X had drawn the attention. Two days before the BET Awards, the artist aimed at Black Entertainment Television with “Late to the Party,” his YoungBoy Never Broke Again-assisted diss track against the network.

And on Thursday afternoon, Nas X teased a mock cover art of someone urinating on the star-topped trophy given to BET Award winners (à la Kanye West peeing on a Grammy), but the official artwork was a tamer shot of a car’s vanity license plate emblazoned with the words “F— BET.”

On the red carpet before the show, Jack Harlow made sure the presence of his “Industry Baby” collaborator was felt when he showed up wearing a Lil Nas X T-shirt, which drew a “wow I really love this man” from his friend once it hit Twitter. (Harlow had taken the shirt off by the time he performed at the awards show where he brought out Brandy to perform her educating verse on his song “First Class.”)

Other artists voiced their support for Nas X too, saying his talent deserved to be recognized.

“I love BET, and I love Black people, but Lil Nas X is Lil Nas X,” said “Mind Yo Business” artist Lakeyah said on the red carpet before the show. “He’s a really great artist.”

But it was Diddy who, in customary fashion, turned up the shine.

“Him being an entrepreneur, having a diversified portfolio that spans music, to fashion, to education with his academy in Harlem,” Shyne, who took the stage with Diddy to perform “Bad Boys for Life,” told The Times on the red carpet. “He’s done it all.”

Just after the collective Bad Boy musical tribute during the awards show, another hip-hop legend surprised the crowd and shared words of tribute to Diddy — Kanye West. Cloaked in a baggy hoodie with his face obscured by his hat, sunglasses and mask, Ye’s appearance brought the crowd to its feet. He then recalled stories of how the trailblazing mogul impacted him.