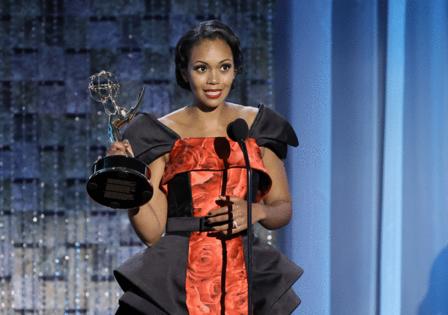 LOS ANGELES -- “The Young and the Restless” star Mishael Morgan made history on Friday night as the first Black lead to win a Daytime Emmy Award.

At the ceremony in Pasadena, the 35-year-old actor from Trinidad and Tobago said she was “so honored to be a vessel and experience this moment.” Morgan, who plays Amanda Sinclair on the CBS soap opera, claimed the prize for lead actress in a drama. She was previously nominated for supporting actress.

“I am being honored regardless of the color of my skin, regardless of my passport, for being the best at what I do,” Morgan said during her acceptance speech, according to the Associated Press.

“Now there are little girls all around the world and they’re seeing another step forward and they know that no matter their industry, no matter their vocation, no matter what, they can strive to be the best at what they do. Not only can they achieve it, but they will be celebrated.”

From 2013 to 2018, Morgan portrayed Hilary Curtis Hamilton (formerly Winters) in “The Young and the Restless.” However, after Hilary was written off the show, Morgan returned in 2019 as her twin sister, Amanda.

“I am so immensely proud of our generation,” Morgan said.

“We are breaking glass ceilings left, right and center. ... It’s because of everybody who is out there today who is proving to the world that we can and we will do this thing called equality and unity together.”

"One day, after she got off the bus, I heard the backpack dump and her ...Read More

Sam Obisanya isn't a laugh riot on "Ted Lasso." Rather, it was likely how involving his Season 2 arc was (activism, leadership, love) that earned the actor who plays him, 25-year-old Toheeb Jimoh, his first Emmy nomination...Read More

Ethan Hawke's return to the horror genre, this time in a villainous role, tops the DVD releases for the week of Aug. 16.

"The Black Phone": A child kidnapper called The Grabber snatches tween boys from the streets of ...Read More

9: Crimes of the Future

When producers looked at the history of women in baseball, they realized “A League of Their Own” only scratched the surface.

Underneath, there were stories about the players’ personal lives and the challenges they ...Read More