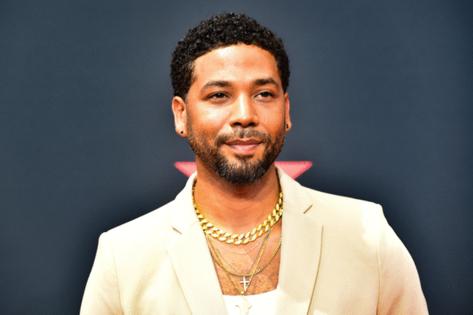 The “Empire” actor, who was charged with lying to police about being the victim of a homophobic and racist 2019 attack, was sentenced to 150 days in county jail in March but was released on bond less than a week later as he appeals the conviction.

Dressed in a tan suit with a white shirt and gold necklaces, Smollett posed for photos on the red carpet at Sunday’s award show at the Microsoft Theater in Los Angeles.

This year’s BET Awards are being hosted by fellow “Empire” star Taraji P. Henson, who said in an Instagram post after Smollett’s sentencing that “the punishment does not fit the crime.”

Smollett claimed to police in January 2019 that he was attacked in Chicago by two men who hurled racist and homophobic slurs at him, poured a chemical on him and put a rope around his neck.

He was found guilty last December on five counts of disorderly conduct.

Smollett, 40, has maintained his innocence throughout the saga, including at the March 10 hearing, where he yelled “I am innocent” after his sentencing came down.

Smollett was nominated for best actor at the 2015 BET Awards for his portrayal of the singer Jamal Lyon on “Empire,” a music-industry drama series that aired on Fox.