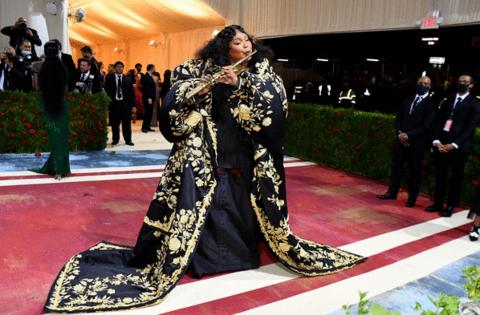 On Friday, the "Grrrls" singer said that she will donate $500,000 of proceeds from her upcoming fall tour to Planned Parenthood and additional abortion organizations. Her pledge comes in response to the U.S. Supreme Court's overturning of Roe v. Wade, which will revoke federal protections for abortion.

"I'm pledging $500K from my upcoming tour to Planned Parenthood and Abortion Rights," she announced on Twitter.

To sweeten the deal, the Yitty shapewear founder added that Live Nation will match her pledge, bringing the total funds up to $1 million for the reproductive health organizations. Live Nation acknowledged its end of the bargain on social media.

Partnering with Lizzo and other artists was just one of the steps Live Nation said it would take amid the historic Supreme Court decision. On Instagram and Twitter posts, Live Nation said it will also cover travel expenses for employees seeking reproductive-health services outside their home state. It joins a number of other entertainment companies — including Netflix, Walt Disney, Sony Pictures and Paramount — that say they will do the same.

The live music and events company also said that it will support employees' community activism and post a bail for workers arrested while protesting peacefully.

Planned Parenthood won't be the only organization to benefit from Lizzo's funds. On Twitter, the singer said that proceeds also will go to the National Network of Abortion Funds. Additionally, Lizzo urged her followers to donate and sign the Bans Off My Body petition.

She continued: "Black women & women of color have historically had disproportionately less access to family planning resources – this is a great loss but not a new one."

Lizzo will hit the road starting Sept. 23 at the FLA Live Arena in Sunrise, Florida. The tour will conclude on Nov. 18 at the Kia Forum in Inglewood, California.