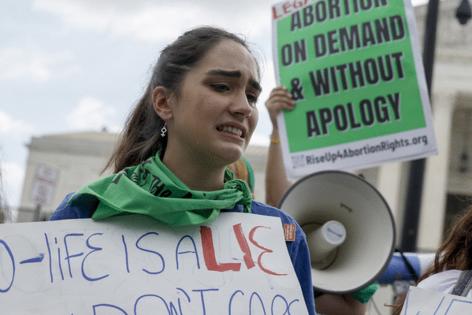 With the U.S. Supreme Court’s 6-3 overruling of Roe v. Wade, eliminating a woman’s constitutionally ensured right to a legal abortion, America has been presented with the trailer for the movie of its own future. It is a film promising to make the pre-Roe, 1963 setting of “Dirty Dancing” look pretty good for women.

One man, of course, gets top billing in this movie. A statement Friday from New York gubernatorial candidate Andrew Giuliani called him out by name, thanking “the enduring legacy of President Donald J. Trump” for Friday’s victory.”

Just as everything in politics is local, every mention or dramatization of abortion in the movies is unavoidably political. It has been so since the very first film to address abortion: the 1916 silent drama “Where Are My Children?”, controversial in its day for its tacit endorsement of birth control. Yet like so many “social problem” films, then and now, there’s more than one political impulse at work in writer-director Lois Weber’s groundbreaking effort, now a part of the National Film Registry at the Library of Congress.

The film also cast a stern eye on self-centered women of means who just wanted to have fun without the wages of sin. For that, and for their illegal abortions, they pay dearly.

“A Century of Abortion Onscreen, 1916-2016,″ a research study initiated by Advancing New Standards in Reproductive Health at the University of California-San Francisco, noted that “Where Are My Children?” espouses “both the pro-eugenicist and anti-abortion sentiments frequently found in discussions of family planning at the time.”

With Friday’s overturn, we’re all looking backward in the same instant, only at different pasts.

Roe v. Wade was passed in 1973. Suddenly, the days of Roe-era films such as “Fast Times at Ridgemont High” (1987), with its frank, unpolemical teen-abortion plot development, seem like a mirage. It wasn’t an “abortion film.” It was a raunchy, R-rated comedy directed by a woman, Amy Heckerling, and she took the time to treat screenwriter Cameron Crowe’s abortion subplot neither glibly nor with a tragic overlay.

In the decade following “Fast Times,” “Dirty Dancing” was, for many — for millions, in fact — told two stories. One was a story of 1963, when abortions were illegal, and dangerous as hell. The other was the movie itself, a hit upon release in 1987, when the legality of a woman’s right to an abortion had been settled. For a while.

When “Dirty Dancing” came out, a minority of Americans believed in wide-ranging legality of abortion. That minority had become a clear majority by the time the U.S. Supreme Court sent Roe v. Wade packing Friday. So much for the will of the majority.

Then again, for all sides right now and always, what Henrik Ibsen’s protagonist in “An Enemy of the People” said holds true: “The majority is always wrong.” In the movie we’re all watching unfold and engulf us this week, one side believes, fervently, in the wrongness of the majority of American opinion. The other side, because of what happened Friday, is more focused on the current majority-conservative U.S. Supreme Court, how it got that way — and what will come of us all in 2024.