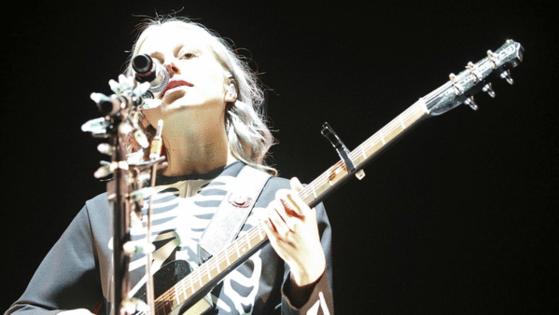 The singe took the opportunity during her inaugural set at Glastonbury Festival in Somerset, England, hours after the U.S. Supreme Court overturned the constitutional right to abortion to call out the highest court in the land.

Noting that she was so excited to be playing the landmark festival for the first time, Bridgers contended: “I’m having the s—iest day,” Bridgers told the crowd at the John Peel Stage. “Are there any Americans here?”

Scattered, halfhearted cheers could be heard as Bridgers said: “Who wants to say, ‘F— the Supreme Court’ on three?”

She and the crowd did just that before the four-time Grammy nominee continued to slam the justices for their much-condemned decision.

“F— America. … Motherf—ers. Trying to tell us what to do with our f—ing bodies.”

Bridgers — who later surprised fans by bringing British singer Arlo Parks on stage with her — took to Twitter ahead of the performance to say, “f—ing evil.”

Early last month, just after the Supreme Court’s drafted ruling was leaked, the “Motion Sickness singer” revealed how personal the legal development is to her.

“I had an abortion in October of last year while I was on tour,” Bridgers tweeted at the time, linking to a list of abortion funds for people to donate to. “I went to planned parenthood where they gave me the abortion pill. It was easy. Everyone deserves that kind of access.”

In a new interview with The Guardian, Bridgers said she “wasn’t f—ing emotional at all” when making the decision.

“Hormonally crazy! But I don’t think you should assign ‘it tore me up’ to me,” she shared. “No! I don’t think about it as a baby, of course not.”

She noted that her tweet had been meant to acknowledge that, “as a white, upper-middle-class woman from California, even if it were to be overturned, I will always have access. … What p—es me off is we’re not talking about me.”

Because of that, the artist is donating $1 from all of her tour tickets to an organization that helps those who are undocumented in their efforts to get abortions.