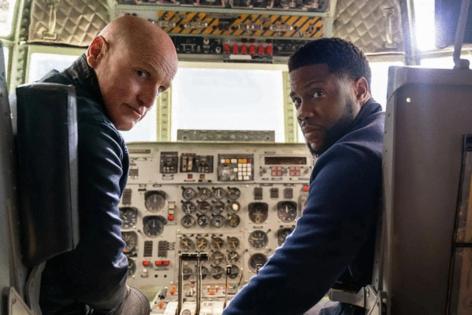 In "The Man From Toronto," Kevin Hart plays Teddy, a man so well-known for his screw-ups that among those in his orbit, including his wife, his name has become a verb that means to screw up. When someone drops the ball, makes a mistake or otherwise blunders something, they've Teddied it.

In that regard, "The Man From Toronto" Teddys it. Big time.

This comic misfire never works, not for a single second, as it slowly drags itself out to nearly the two-hour mark. There's nothing funny or relatable to gravitate toward in the story and no fireworks in the dull action. It simply starts out bad and stays there the entire time.

Kevin Hart's Teddy is a genial fellow who dreams of making it big in the world of fitness but can't come up with any ideas that stick. His new pitch for contactless boxing ("all the wow without the ow!") is his latest stillborn idea.

Down on his luck after losing his job, Teddy takes his wife, Ruth (Jasmine Mathews), on a relaxing vacation to Onancock, Virginia, no doubt chosen for the bathroom humor possibilities inherent in its name. He misidentifies the address because of low toner in his printer — how's that for a plot device? — and pulls up to the wrong house, where he's confused for a world-famous assassin known as the Man from Toronto (Woody Harrelson).

Through a series of contrivances too boring to spell out, Teddy must team with Toronto to take down an international ring of something or another. A typical strained buddy relationship develops between the two leads, as they're hunted by a cadre of worldwide assassins, including the Man from Miami (Pierson Fodé, a standout, for what it's worth).

Harrelson has done these kinds of things before, as has Hart, but they have no chemistry together and director Patrick Hughes ("The Hitman's Bodyguard" and its putrid sequel) makes no attempt to set the film in anything that resembles a real world. The comic elements flatline as Hart flounders (it's a step back for the actor) and Harrelson, who replaced Jason Statham after he exited the project, does the perturbed thing. The strain is felt all around. In the end, "The Man from Toronto" is just like contactless boxing: No matter how hard it tries to hit, it completely misses its target.

'THE MAN FROM TORONTO'

MPAA rating: PG-13 (for violence throughout, some strong language and suggestive material)

How to watch: Premiered Friday on Netflix