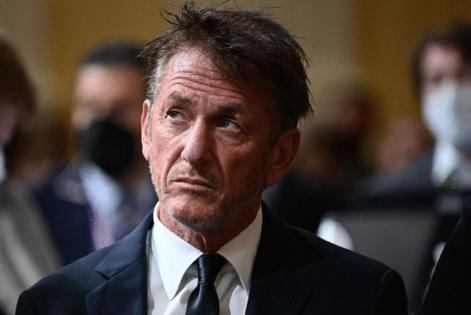 The outspoken "Milk" and "Mystic River" Academy Award winner sat with officers who defended the U.S. Capitol during the Jan. 6, 2021, attack by supporters of former President Donald Trump in an attempt to overturn the results of the 2020 election.

The House select committee has moved into its second week of hearings as it reveals the findings of its yearlong investigation of the insurrection.

"I'm just here to observe just [as a] another citizen," he told reporters, according to CNN.

"I think we all saw what happened on Jan. 6 and now we're looking to see if justice comes on the other side of it," he added, noting that he had been following the hearings.

The hearings have been compared to the Watergate scandal, so it should be noted that Penn starred as former President Richard Nixon's attorney general, John Mitchell, in the new Starz series "Gaslit."

Earlier this week, Penn was among the A-list celebrities that Ukraine's Ministry of Defense thanked in a tweet for visiting the war-torn nation five months into Russian's invasion. Penn had even lobbied to have Ukraine president and former actor Volodymyr Zelenskyy appear at this year's Academy Awards to bring more attention to Russia's attack on the nation.

"[Ukraine] is grateful to Hollywood stars who, despite the danger, have visited us. @SeanPenn, @LievSchreiber, Angelina Jolie, @BenStiller you are more than just an inspiration to all of us. Millions around the world have heard the truth from you about the struggle of the [Ukrainian] people," the tweet said.