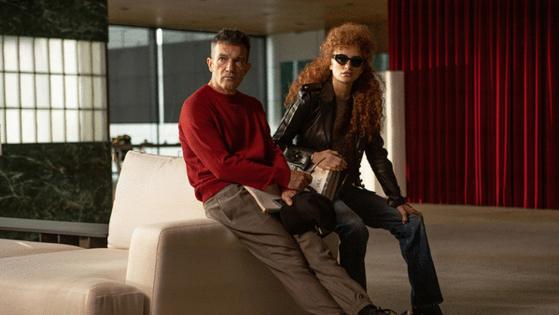 So it's a bit strange to realize that, apart from a couple of brief encounters and near-encounters in two high-spirited Pedro Almodóvar films, Antonio Banderas and Penélope Cruz had never been on a movie set together, let alone one in which they shared starring roles.

That is, until "Official Competition," a black comedy now in limited theatrical release.

In this Argentine-Spanish co-production — directed by Argentines Mariano Cohn and Gastón Duprat, and filmed on the outskirts of Madrid — Banderas plays Félix Rivero, an international movie star who places himself under the orders of Lola Cuevas (Cruz), an overweening independent director. Her unique working methods give rise to more than one tense and awkward moment with Rivero's co-star of the film-within-the film, Iván Torres, an actor of greater prestige than Félix but far less fame. (He's played by Argentine Óscar Martínez of "The Distinguished Citizen" and "Wild Tales.")

Despite their infrequent collaborations, Cruz and Banderas have had curiously similar career trajectories. Besides turning up in several of Almodóvar's shimmering screwball-comedy melodramas, both successfully made the leap into the Hollywood mainstream, Cruz with "Pirates of the Caribbean: On Stranger Tides" and an Oscar-winning turn in Woody Allen's "Vicky Cristina Barcelona," among other roles, and Banderas with "Philadelphia," "Desperado," "The Mask of Zorro" and the "Shrek" saga.

They've also known each other for nearly three decades, Banderas said during a recent Zoom interview from his apartment in New York, where he had flown in from Barcelona to attend the screening of "Official Competition" at the Tribeca Film Festival. They first met in New York when he was playing the lover of Tom Hanks' AIDS-stricken lawyer during shooting of "Philadelphia" and Cruz was figuring out how she too might crack the English-language market.

Banderas said he enjoyed watching Cruz construct her prismatic character in "Official Competition," which he describes as "very different" from the real Cruz, "even in the external image" (for starters, check out her character's witchy red hairdo).

"Penélope created from the inside out, probably using part of her imagination and part of the behaviors that she herself had seen in different directors, to which she then added this whole exterior aspect, with the red wig and the eccentric side that the character has," Banderas said.

In Almodóvar's "Pain and Glory" (2019), Banderas and Cruz appeared almost entirely in separate scenes, on parallel narrative tracks, he as a physically and mentally ailing Spanish director, she glimpsed in flashbacks as his mother (or possibly, in a typically Almodóvarian life-imitates-art-imitates-life twist, as an actress playing his mother).

Yet, speaking by phone from Madrid, Cruz said that after teaming up with Banderas on "Official Competition" she felt they'd been colleagues forever.

"Pedro brought us together; it couldn't have happened any other way," Cruz said, referring to Almodóvar, the enfant terrible turned eminence terrible of European art-house film. "But we had only had one scene together in 'I'm So Excited!' and in 'Pain and Glory' we were separated."

"In this case, communication was very easy, because we know each other very well," she continued. "The biggest difficulty was that you had to cut many times due to one of us laughing, including the directors and members of the production team, because this is one of those intelligent comedies that are not made frequently."

Beyond getting to work with Banderas, the role piqued Cruz's interest because it allowed her to play a filmmaker.

"I know a lot about this world, because I've been in it since I was 13 or 14 years old, but this was a kind of weirdo that I was able to create as if it were my own Frankenstein, using references that did not correspond only to women or people linked to cinema but also to other fields of art," said Cruz, who has directed some short films and a documentary. "But of course, I can't name them, because I don't think they would be very happy to know this."

Banderas relished the challenge, and the ironic analogs, of portraying Félix, an internationally famous and prolific Spanish actor who has triumphed in Hollywood, despite (or perhaps because of?) his arrogant and impulsive temperament.

"That was not a problem for me," Banderas said of the role. "In fact, when we received the script, Penélope and I proposed to directors Gastón Duprat and Mariano Cohn that they come to my house in London to work on the script and thus be able to contribute details that were added to the film, basically about behaviors that we have seen in film rehearsals and that have to do with ego and vanity. We laughed a lot remembering things we had seen and things we had done."

Cruz echoed her co-star's praise for Duprat and Cohn, who made their mark internationally with "The Distinguished Citizen," a 2016 dramatic comedy starring Martinez. "Both of them have a very smart, very acidic, very elegant sense of humor, and despite the input we made, the script remained completely theirs," Cruz said.

In building her character in her latest film, Cruz wanted to give Lola a distinctive look to suit her relentlessly attention-seeking persona.

"She is a very careful egomaniac, and quite insufferable," she summarized. "However, when playing her, I couldn't judge her but had to defend the reality of her," although if she met someone like that in reality, "I would run away."

"The way she looked was very important, because she's kind of a scarecrow who's making a 'statement' all the time, from the clothes she wears to the way she combs her hair to the way she walks. Deep down, I see her as a scared girl."

Contemplating his character, and that of Martínez, Banderas sees Félix and Iván as "equally ridiculous," the former as a frivolous lover of "prizes, money and women" and the latter as a "purist in life" who "is also deeply narcissistic."

"But I think the movie is really talking about the ridiculousness of being human and the ability we have to easily become what we criticize," he said.

"The great thing about this script is that it hasn't built cliches, because when you think you have each character in a box, you realize it's not that easy," she said. "Lola says a lot of bull— and she has a lot of delusions of grandeur, but she suddenly blurts out something very interesting. Everyone in the movie is many things, just as we are all many things in real life."

Banderas' route to Hollywood blockbusters like "Shrek" passed through the School of Dramatic Art in Málaga, Spain, in his hometown, where he spent four years before moving to Madrid and joining the ranks of professional theater.

Unlike some of his U.S. peers, Banderas hasn't been yoked to an exclusively Method approach in trying to tap into profound emotional truths. That theme bubbles up in "Official Competition," as Félix's and Iván's completely opposite performance styles generate many a comic collision.

"In all these years, I have met many people that, in the end, find the truth of what they do using all kinds of methods," Banderas said. "There are people who are very conscientious with the preparation they do but who do not end up convincing anyone, and others who are listening to a soccer game before going onstage and then make the entire theater cry. It is very difficult to determine what is the exact preparation to achieve excellence.

"The empirical world is the one that has really made me, that is, the world of experience," he continued. "At a certain point, there were people who thought that I was only Zorro, that I only made adventure films and that I simply had the necessary charisma to do so. But later on, they were very surprised to see me in 'Pain and Glory,'" the 2019 film that landed him an Oscar nomination.

Banderas still considers himself to be essentially a theater actor, but he's willing to provide whatever the performance demands, whether in an obscure stage role or for a global megaplex audience.

Similarly, Cruz indicated that her methods keep evolving. Sometimes, on film sets, she said, directors foster a strained, unpleasant atmosphere, in hopes of coaxing more electric performances. "The truth is that I myself, at 20 or 30 years old, thought that the more I suffered, the better the performance would come out," Cruz said.

"But, the older I get, the more I value what it is to interpret from the imagination, instead of forcing your own experiences and your own traumas at work, which are going to enter anyway, because that door is always open."

That does not mean that the actress has not sometimes been intensely — and intentionally — exposed to emotional pain in her recent works, as happened in "Parallel Mothers" (2021), the Almodóvar film that earned her an Oscar nomination. And that put her in one particularly vulnerable situation.

"They lifted me up one day from the ground because I couldn't get out of [the] fiction; I was totally in a loop, and Pedro helped me out by giving me a hug," she recalled. "Those things also happen, because you can get to a place like that from your imagination, as Félix says in a very funny moment in this film. ... Doing something like this also makes you feel a lot of empathy for stories that are not yours, for different realities that you may not have lived but that you can understand."

Cruz, who studied classical ballet for nine years and later trained with renowned acting teacher Cristina Rota, said that with Almodóvar, she works alongside him and rehearses over several months. When time is limited, Cruz prepares more on her own, with an acting teacher's assistance.

"If you touch a character that exists or has existed, you have much more research material, as happened with Donatella [Versace]," she said, referencing the television miniseries "The Assassination of Gianni Versace: American Crime Story," for which she spent a lot of time listening to audios and watching videos.

Cruz's next film is "On the Fringe," the directorial debut of popular Argentine-Spanish actor Juan Diego Botto, a friend.

Banderas said he's focused on the stage. He recently bought a theater in Málaga and has been offering all kinds of presentations there. But he hasn't abandoned Hollywood, where he most recently wrapped filming the next, still untitled Indiana Jones segment.

"It was really nice to be around Harrison [Ford] and Phoebe Waller-Bridge," he said.