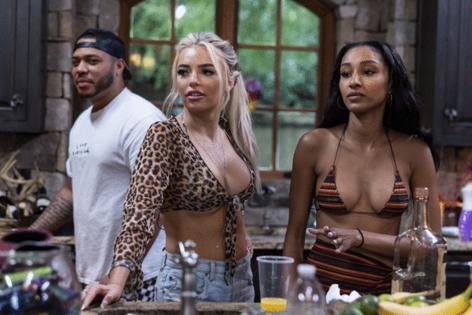 ATLANTA — In 2009, when basic cable reality TV was ascendant, MTV hit the jackpot with "Jersey Shore," which unleashed what would become household names like Snooki and the Situation upon an unsuspecting world. A summer home full of hilarious characters who would get drunk and clash and party and just be absurd.

MTV has since replicated that formula with "Floribama Shore" and now "Buckhead Shore."

The entire premise is patently absurd in one sense because the geography of Buckhead belies the name. There is no real shore there. But MTV isn't exactly known for documentarian exactitude.

Parker Lipman, a scion of the Zaxby's fast-food chain in his early 20s, has a group of eight close friends who live in and around Buckhead and join him every summer at his family lake house in Lake Burton 100 miles northeast of Atlanta. He pitched the show with his on-again-off-again girlfriend Katie Canham and MTV bit. This was taped largely last summer.

"We've been coming to my lake house collectively for the past 10 years," said Parker in a brief group interview the cast did with The Atlanta Journal-Constitution via Zoom. "The shore is a way to get out of that fast-paced life in Buckhead."

"You get the Buckhead part of it because we all work and party in Buckhead," said cast member Bethania Locke. "Parker's house has been our escape during the summer. It's piecing them both together. We're at the lake part of the time, then we see our lives in Buckhead."

On the first episode, Parker described himself as "a country boy at heart and a city boy in my pants." He paused, then said, "God! I hope they don't [expletive] use that!" (Of course they did.)

Parker to the AJC said he also loves his family business of fast-food chicken. "It's a way of life for me," he said. "I grew up at headquarters." He currently works in the "expansion" division adding new outlets.

Juju Barney is one of his best friends. His dad opened the legendary Atlanta strip club Magic City in 1985 and he and his older brother now run it. "Parker is the king of chicken strips," he said during the first episode. "I'm the king of stripper chicks."

"We're all in our 20s, trying to figure out our lives, trying to grow and make a name for ourselves," said Bethania, a teacher. "We are a very diverse group of friends so you see a lot of culture. Our families are involved. It's a good look at our lives beyond Buckhead and the partying ... I grew up a lot this past summer."

DJ Simmons is a musician whose dad Daryl Simmons has songwriting credits such as Bobby Brown's hit single "Don't Be Cruel" and Boyz II Men's No. 1 song ""End of the Road." He is trying to be a songwriter as well but admits to getting "sidetracked by the partying." He and Bethania have been friends a long time and had recently hooked up.

Chelsea Prescott, a Georgia State political science major, said she just brings good vibes and a good ear for friends. "I'm here for a good time, not a long time," she said on the show. Adamo Giraldo is an aviation mechanic on the weekdays and a stripper on weekends. Pat Muresan is one of Parker's close buds and runs multiple gas stations.

Katie, now a model in Miami, is Parker's ex of four years but ends up going to the lake house anyway because that is a recipe for tension and drama. "Toxic love," is how DJ described their relationship during the first episode. "'The Notebook,' but way worse."

"I'm still integrated in his life every day" Katie said to the AJC.

Another Parker ex, Savannah Gabriel, pops up as well and creates a bit of a love triangle.

In other words, it's exactly what you would expect on a show like this, missing only the silly nicknames many of the "Jersey Shore" characters still have. In fact, "Buckhead Shore" follows a new episode of "Jersey Shore Family Vacation," which features many of the same folks from the original "Jersey Shore," just older.

"Buckhead Shore," debuts at 9 p.m. ET Thursday, June 23, on MTV and available on Paramount+ the next day.