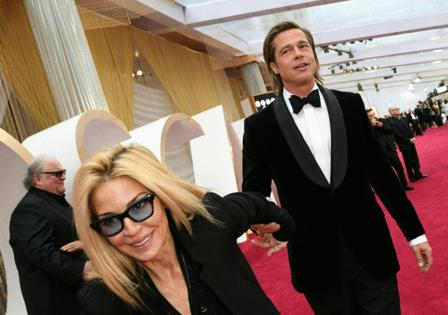 Brad Pitt’s participation in an Alcoholics Anonymous group was what helped him get sober following his 2016 divorce from Angelina Jolie, he told GQ in the magazine’s August cover story.

“I had a really cool men’s group here that was really private and selective, so it was safe,” the 58-year-old Oscar winner said about his 18-month experience in Alcoholics Anonymous.

But the actor had some initial trepidation, given horror stories he’d seen play out online involving those in AA.

“I’d seen things of other people who had been recorded while they were spilling their guts,” said Pitt. “And that’s just atrocious to me.”

He explained his going cold turkey with smoking as a consequence of being unable to smoke in moderation.

“I don’t have that ability to do just one or two [cigarettes] a day,” said Pitt. “It’s not in my makeup. I’m all in. And I’m going to drive into the ground. I’ve lost my privileges.”

Prior to getting sober, Pitt and 47-year-old Jolie —whose marriage ended in 2016 and jump-started a lengthy custody battle involving their six children — purchased a Provence vineyard, Chateau Miraval, in 2008. The Academy Award-winning actress just sold her stake, a move which Pitt said earlier this month sought “to inflict harm” on him.

While Pitt left much to be desired insofar as the specifics of his career trajectory — current producing projects aside — the actor did reveal that he feels like he’s “on my last leg.

“This last semester or trimester. What is this section gonna be?” he said. “And how do I wanna design that?”