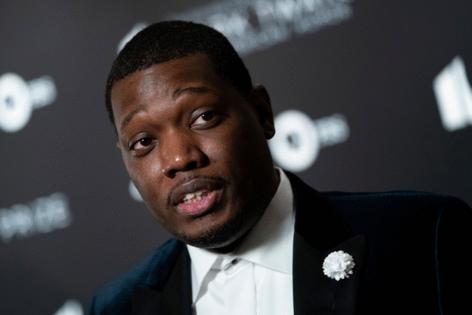 "Trainspotting" director Danny Boyle returns to his favorite subject: boys being boys. In this case, the lads are the Sex Pistols, the punkiest of the punkers. Throughout the six-part series, Boyle and writer Craig Pearce ("Moulin Rouge!") throw so much at you at such a breakneck speed, you may suspect Johnny Rotten laced your snacks. The only thing missing is a standard plot, an approach that perfectly reflects the band's anti-establishment attitude. It's an appropriate mess. Debuts Tuesday, Hulu

It's unclear whether Michael Che will be returning to the "Saturday Night Live" news desk. But there's no doubt that the comic is itching to stretch himself. In the second season of his own sketch show, Che offers up edgy takes on racial slurs and abortion that would never get past NBC censors. He makes up for his limited acting ability by recruiting famous friends like Amy Schumer and Kenan Thompson to deliver much of the dirty work. HBO Max

If you ever doubted that Teddy Roosevelt deserved a spot on Mount Rushmore, check out this four-hour documentary, a mix of gripping reenactments and insightful commentary from historians. The two-night miniseries does a splendid job of showing how the 26th president put his oversized ego to good use, from cleaning up police corruption in New York City to pushing for the Panama Canal. But the producers, who include Leonardo DiCaprio, don't shy away from Roosevelt's shortcomings, including his insensitivity toward Black people and Native Americans. It's a rough ride. 8 p.m. ET Monday and Tuesday, History Channel

'The Greatest Mixtape Ever'

In the late '90s, videotape, rap and streetball came together in perfect harmony, a three-way marriage that would forever change both sports and pop culture. This fast-paced hourlong documentary looks at how a grainy video of hoop wizards sparked a revolution. 8 p.m. Tuesday, ESPN

In this latest attempt to turn your TV into a boogie wonderland, would-be TikTok stars compete to see who can bust the most impressive moves. But make no mistake; this is the Shakira Show. The Grammy-winning artist may only be one of three judges, but the other panelists only seem to be on hand to make sure that her hips don't lie. 10 p.m. Tuesday, NBC