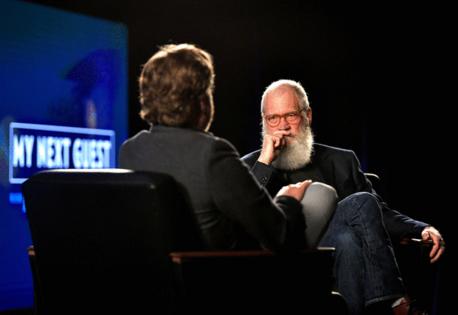 David Letterman may have given us more laughs than anyone in TV history. There's plenty of supporting evidence of it on his new YouTube channel, which is constantly being updated with classic clips from his past late-night shows, a treasure trove for those who believe Stupid Pet Tricks is three times funnier than watching Lucille Ball stuff chocolates in her mouth.

But that trip down memory lane also reveals an ugly truth: Letterman was a lousy interviewer. He was easily distracted, bored with those he imagined were beneath him and eager to jump on every opportunity to sneak in a one-liner, even if it meant stepping all over a guest's story.

Letterman wasn't alone. Late-night hosts have a tradition of being more interested in comedy than conversation. But the 75-year-old entertainer has done something most of his contemporaries never did — he's evolved.

"My Next Guest Needs No Introduction," which recently dropped its fourth season on Netflix, is proof. This is the new Letterman — thoughtful, considerate, curious and dynamite at getting even the most guarded personalities to open up.

The six new episodes are the best yet, in large part because almost all the interviews were conducted without an audience, removing any nagging temptation to play to a crowd. Instead, Letterman is laser-focused on his guests, stroking his beard to signal that he's actively listening.

When he asks Billie Eilish about her ability to move a crowd, the pop star seems more impressed with his attitude than the question itself.

"I'm glad you asked," she says. "It sounds like you actually want to know."

Letterman is so tuned in that he catches Eilish making a slight facial tic, an observation that leads to a deep discussion about Tourette's syndrome.

In an interview recorded before the Oscars, Will Smith marvels at the fact that Letterman seems to have prepared for the discussion by reading his autobiography.

"Remember when I was on your show for 'I, Robot'?" Smith says. "You had not seen it and you thought I didn't know."