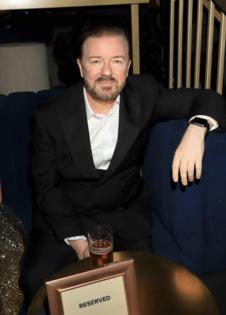 In an interview with SiriusXM released Wednesday morning, Gervais said “everyone’s gonna complain about everything” in the new special, which dropped Tuesday. Gervais, who has previously leaned into provocative, “non-politically correct” comedy, claimed people will only take offense to jokes at their own expense, but would laugh along if it was about someone else.

“Every single line, someone is going to complain, either because they hate it, or they don’t get it,” Gervais said. “I can list 20 taboo subjects. Everyone in the world laughs at 19 of them, and hates the one that affects them.”

He accused the media of falsely magnifying the concerns people express on social media, believing online outrage pales next to offline apathy.

“Twenty years ago if you complained about something, you get out a pen and paper and go, ‘Dear BBC.’ Now they can fire off a tweet, and the f— press pick up the tweet. They’ll say, ‘People are mad, said 69341' ... most people aren’t mad. Most people don’t know about it.”

In “SuperNature,” which is rife with transphobic jokes, Gervais comments on “old-fashioned” versus “new women,” asks trans women to “lose the c—" and riffs on “cancel culture” and “woke comedy.” At the end of the special, he says he supports trans rights in real life, while claiming at the beginning that he makes jokes at their expense to “treat them equally.”

“I talk about AIDS, famine, cancer, the Holocaust, rape, pedophilia. But no, the one thing you mustn’t joke about is identity politics,” Gervais says in the special. “The one thing you should never joke about is the trans issue. ‘They just want to be treated equally.’ I agree. That’s why I include them.”

Still, criticism quickly spread online from people who called out the special’s harmful nature material. GLAAD was quick to weigh in Wednesday, accusing Netflix of breaking its own content-moderation rules by airing the special.

“Attention Ricky and Netflix: people living with HIV today, when on effective treatment, lead long and healthy lives and cannot transmit HIV to others,” GLAAD continued. “Netflix has a policy that content ‘designed to incite hate or violence’ is not allowed on their platform, but we all know that anti-LGBTQ content does exactly that.

“While Netflix is home to some groundbreaking LGBTQ shows, it refuses to enforce its own policy in comedy,” the statement added. “The LGBTQ community and our allies have made it very clear that so-called comedians who spew hate in place of humor, and the media companies who give them a platform, will be held accountable. Meanwhile, there are PLENTY of funny LGBTQ comedians to support.”

In October, the streaming service faced similar criticism for defending Dave Chappelle’s transphobic special, “The Closer.” Several Netflix’ employees staged a walkout in protest, demanding the company remove murals and posters of Chappelle from the office, set aside a fund to cultivate trans and nonbinary talent, and attach a disclaimer to the special saying it contained “transphobic language, misogyny, homophobia, and hate speech.”

“Externally, particularly in stand-up comedy, artistic freedom is obviously a very different standard of speech than we allow internally as the goals are different,” Sarandos wrote in a memo obtained by Variety. “Entertaining people versus maintaining a respectful, productive workplace.”