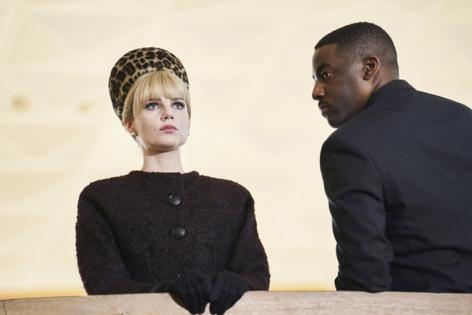 Based on the 1965 Michael Caine espionage thriller of the same name, “The Ipcress File” on AMC+ (by way of ITV in the U.K.) keeps the Cold War action set in the early 1960s. Harry Palmer is a young Brit with clever instincts but not much spy experience, and he gets roped into a saga that involves a kidnapped nuclear scientist, pushy American interests and a brainwashing scheme that could lead to an assassination. Witty and occasionally terrifying, the series moves at a good clip and is stylish — it retains those thick-framed eyeglasses that are so iconic to Caine’s original performance.

In the ‘65 film (adapted from Len Deighton’s 1962 novel), Harry Palmer emerged onto the pop-cultural landscape as the anti-James Bond, and this six-episode version sticks to that approach with sleepy-eyed actor Joe Cole (“Peaky Blinders”) stepping into the Caine role. He’s a regular bloke with a smuggler’s talents, which lands him behind bars after he’s busted for running booze while serving as an army corporal stationed in Germany.

But his craftiness and knowledge of the landscape beyond the Berlin Wall make him useful to the task at hand — retrieving a kidnapped nuclear physicist — at least as far as certain parties within British intelligence (neither MI5 nor MI6, but some hush-hush operation under the Ministry of Defense) are concerned. So Harry is sprung from prison and suddenly he’s a spy, working alongside a young woman named Jean Courtney (Lucy Boynton), an icy blonde who has far more experience in all things espionage.

Harry and Jean are a study in opposites — he’s the son of a dock worker who gets by on his wits; she’s the exceedingly smart, wildly beautiful daughter of a posh somebody-or-other. They begin as wary compatriots, only slowly coming to appreciate one another’s skills once their straightforward mission becomes exceedingly messy.

Jean’s role has been beefed up considerably from the film, but she remains a cipher. She has a fiance who is clueless about her real job, and yet ultimately her spy skills aren’t sharp enough to fool the man she intends to marry. It’s unclear if the marriage was intended as part of her cover or something she actually wanted or simply the next inevitable step for a woman of her time. Maybe it’s everything all at once, but we’re never given a glimpse into her true feelings. She’s an expert at maintaining a mask. But how did she get recruited? And how did she get so good, so fast? Where does she find the time to maintain her exquisite hair and makeup and wardrobe when dirtier, nastier doings are required of her as well? Who knows.

We get more back story when it comes to Harry and Jean’s boss, a seasoned intelligence man named Major Dalby (Tom Hollander) who has some inconvenient emotional entanglements that compromise the job at hand — and the Soviets are keen to exploit that. Hollander is quite good, underplaying everything. There’s more going on here than meets the eye. Everyone’s a potential mark.

The Americans are in the mix as well as allies, but also as yet another of the story’s villains. It’s a wonderfully acidic take that, not-inaccurately, portrays America as the Land of the Glib. Most intriguingly, this comes in the form of a CIA agent named Paul Maddox (played by British actor Ashley Thomas, convincingly pulling off an American accent) who is smooth and solid and it’s entirely unclear where his loyalties lie.

Paul is Black, which (as he notes himself) makes him a tokenized presence among intelligence officers of this era. It’s a role that almost feels like a nod to “The Spook Who Sat by the Door,” Sam Greenlee’s 1969 novel (and later 1973 film) that was loosely inspired by his own less-than-happy experiences as one of the few Black people to work for a U.S. intelligence agency. Even when it comes to matters of intelligence, racism is always there. “The Ipcress File” swerves away from any narrative ponderings on this front, mostly because it’s a story of the British, not the Americans, but it also suggests there might be something there for other TV writers to explore in a different series altogether.

Ultimately, as their quest to track down the nuclear scientist progresses, Harry, Jean and Dalby find the web is far more tangled than they first suspected. There’s a brainwashing experiment at the heart of it all — that so-called Ipcress file — that can turn any unsuspecting soul into an assassin, and poor Harry gets a firsthand look at exactly what that entails. These scenes are at odds, tonally, with the earlier portions of the season and that’s not a bad thing: Brainwashing should be disturbing. But it’s a change of pace from the mostly spry approach that defines the early episodes.