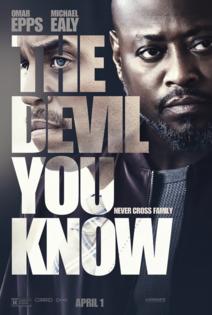 "The Devil You Know": Omar Epps plays an ex-con and recovered addict enjoying a new lease on life who finds himself drawn back into his old world when his brother gets involved with something dangerous.

"'Devil' plays more as a drama than a crime film, with the brothers in particular establishing strong chemistry," writes Los Angeles Times critic Michael Ordoña in his review. "While the dramatic focus is a welcome change for the genre, some tightening and trimming would have made for a better 'The Devil You Know.'"

"Lucifer: The Complete Fifth Season": Having debuted on Netflix in two installments in 2020 and 2021, Season 5 of this urban fantasy series continues the story of Lucifer, who is residing not in the fiery depths of hell but in Los Angeles, the city of angels. Featuring Tom Ellis in the title role, and based on the character from "The Sandman" comic book series.

"The Boys: Seasons 1 & 2 Collection": With the third season premiering on June 3, catch up on the Prime Video series about a group of vigilantes trying to bring down corrupt superheroes. Based on the DC Comics series, the show stars Karl Urban, Jack Quaid and Antony Starr.

"Why Women Kill: Season Two": The second season of the Paramount+ anthology series offers a new cast and storylines, this time set in 1949 and starring Allison Tolman as a typical 1940s housewife.

OUT ON DIGITAL HD MAY 31

"Father Stu": Mark Wahlberg plays the lead in this true story of a boozing, boxing actor who turns his life around and enters the priesthood. Also starring Mel Gibson, and written and directed by his girlfriend, Rosalind Ross.