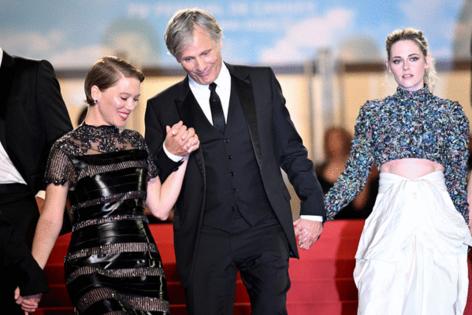 Early on in David Cronenberg’s “Crimes of the Future,” a speculative horror-comedy as wildly deranged as it is beautifully controlled, we witness a live demonstration that functions as an art show, a medical procedure and a very public seduction. The nearly naked man encased in the large, mechanized sarcophagus is Saul Tenser (Viggo Mortensen), who has willingly turned his body into a living, breathing, lightly bleeding fresco. The woman working deftly on his insides is Caprice (Léa Seydoux), though instead of scrubs she wears a thin-strapped evening gown, and she uses what looks like a rubbery video-game console to control the scalpels that will slice her partner open.

Saul, his eyes closed and his mouth slightly open, takes intense pleasure in these probing, penetrative sensations. Caprice clearly does as well, breathing heavily as she presses the console against her body and fingers the controls. Whether you savor the sensuality of this sequence or recoil from its grotesquerie (or both), you understand, on a visceral as well as intellectual level, what’s going on. So much so that it’s a little redundant, if amusing, when a mousy onlooker named Timlin (Kristen Stewart) pops up in the next scene to declare, “Surgery is the new sex.”

All of which may provoke two distinct thoughts: First, why isn’t this called “Crimes of the Suture”? And second, it’s marvelous to have Cronenberg back and to behold his undimmed, unparalleled skill at welding the formulations of horror and science fiction to the cinema of ideas. Eight years have passed since his previous feature, the scabrous Hollywood takedown “Maps to the Stars,” and “Crimes of the Future” suggests an amusing, halfway plausible explanation for why it took him so long to emerge from a rumored early retirement.

The official narrative is that Cronenberg dusted off and revised a decades-old script. Maybe so, or maybe he really did travel to some not-so-distant future dystopia, from which he has now returned with a prophecy and a warning. Bearing no narrative relation to Cronenberg’s 1970 independent feature of the same title, this “Crimes of the Future” is a feverishly imagined dispatch from a world where weird names abound, environmental catastrophe looms and the human body is mutating with alarming, unprecedented speed. No obvious pandemic metaphors loom here, even if Saul does spend much of his time outdoors in a face mask that matches his dark hooded robes.

In an eerily depopulated world where physical pain has dramatically decreased, leaving individuals free to cut open their own bodies for pleasure and profit, Saul is both an outlier and an exemplar. His own body is frail, weak and plagued by chronic agony, the effects of which he tries to dull with automated home-care equipment — a torturous-looking chair that aids with eating and digestion, a veiny, midair-suspended bed stolen from H.R. Giger’s boudoir — that’s engineered to anticipate and eliminate every discomfort. And that discomfort may be tied to his body’s unusual ability to synthesize new organs, essentially a form of metastatic cancer that Caprice and her scalpels keep routinely in check.

Mortensen, such a muscled, brutish pillar of strength in Cronenberg’s “A History of Violence” and “Eastern Promises,” is all the more poignant here with his lumbering gait and rasping-and-coughing vulnerability. He and Seydoux have a moving rapport that carries a whisper of high-toned kink: Caprice may be a doctor attending to her patient and a dominant toying with her submissive, but most of all, she sees herself as an artist perfecting her canvas.

“How can a tumorous growth be considered art?” someone asks, and the answer goes beyond the dark tattoos that Caprice etches on Saul’s superfluous organs. In removing them from his system, she disrupts the natural flow of human entropy, extracting hope, inspiration and even meaning from the body’s inner chaos.

And whatever else it may be — a blood-spattered neo-noir, a parable of environmental decay, an uncommonly bizarre and tender love story — “Crimes of the Future” also operates as a deadpan satire of the modern art world. Seldom has the natural tendency of artists to mine themselves for creative material been pushed to such exquisitely yucky extremes.

Saul and Caprice are an avant-garde power couple, and their all-consuming commitment to their work has earned them no shortage of loyal fans, showily self-mutilating rivals and awestruck groupies.

Two of the latter are Timlin and her boss, Wippet (Don McKellar), who work for a clandestine government branch tasked with officially registering each new organ that appears, in hopes of reversing their grim diagnosis that “human evolution is going wrong.”