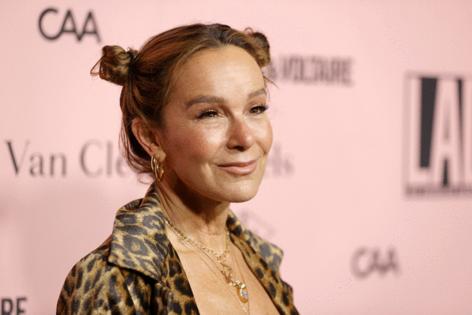 Jennifer Grey became a household name in 1987 with the release of “Dirty Dancing,” playing a character named Baby who does some important growing up during a summer vacation to the Catskills. “Nobody puts Baby in a corner” is the famous line from the movie, so it’s fitting that the title of Grey’s new memoir is a play on that. It’s called “Out of the Corner.”

In writing the book, Grey said she became something of a detective unraveling a mystery. “I had very sketchy childhood memories and I thought, how am I going to write a memoir if I have no memories before ninth grade or whatever? So I started with what I did remember. There are snapshots. There are sensorial memories — of a sense, a texture of a dress — and as I started to write, it started to open up for me. And because it was a slow process, I think it allowed my unconscious to reveal more to me.”

Grey’s career on screen kicked off in the 1980s with “Ferris Bueller’s Day Off” among others, and her credits in the years since include roles on “Grey’s Anatomy,” “The Conners” and various characters on “Phineas and Ferb.” She’s also set to star in a forthcoming “Dirty Dancing” sequel.

She also had a career on stage, from which she ultimately walked away. She tells that story for My Worst Moment. “I did not write it in my book, because there was already too much hard stuff and I thought, nobody can take this much darkness,” she said with a rueful laugh.

“I am very much a good-girl perfectionist. And I’m also an extremely anxious person. But I didn’t know these things about myself. I didn’t know any other way to be. But hindsight being 20/20, I can tell you I’ve legit had an anxiety disorder my whole life, and it was untreated and undiagnosed. I always felt that I had to be perfect and there was enormous inner pressure to be perfect. So when it came to rehearsing or studying or preparing for anything, I overprepared.

“After I had done ‘Dirty Dancing,’ I was very known. And then I had the nose debacle (Grey had plastic surgery on her nose, which changed her appearance) — schnozageddon, as I call it — and I had been kicked out of Hollywood, for lack of a better term. I just lost any ability to make a living or do anything (laughs). It was like, I’m in purgatory! And then (in 1993) I got offered to do a play that had been a hit at the Pasadena Playhouse and it was moving to Broadway and they asked me if I would play a lead. It was called ‘Twilight of the Golds’ and we did a pre-Broadway tour first.

“So we do the tour and then we open on Broadway. And I think it was better reviewed out of town than it was in New York. I don’t really read reviews, but it’s one of those things where you can kind of read everyone’s face and energy if the reviews aren’t good. That might have been what triggered all of this.

“The play starts with me entering the stage, and I would come in and fluff the cushions on the couch and straighten up the magazines that are on a little ottoman. And a couple days into the run, right as I’m about to make my entrance, the stage manager whispers to me, ‘Oh God, I forgot to preset the magazines.’ And I said, ‘No problem.’ Because I know how to improvise and do whatever, right? Fine, no big deal.

“So I go out there, I’m fluffing the pillows. And suddenly something doesn’t feel right. And it looks like the lighting has changed. And I start thinking: Oh, what’s my next line? I don’t know what my next line is. And then when it comes to the moment when I was supposed to say it, it just pops out. I say it. And I’m thinking, that was weird. But what is my next line? And then the line would just come out, as if somebody else was saying it. I never missed a line.