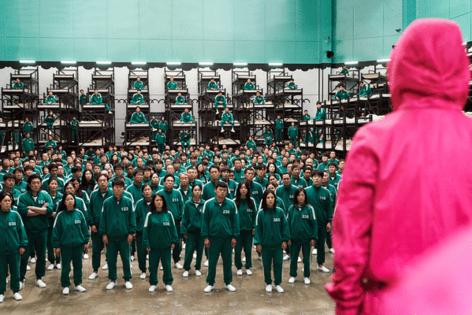 Netflix's most popular series to date, "Squid Game," isn't just a creepy thriller about a survival competition. In its nightmarish carnival of the economically struggling wagering their lives for the amusement of wealthy voyeurs, creator, writer and director Hwang Dong-hyuk unleashes a blistering critique of the system that makes such a story seem not impossible. He and his collaborators use sly cinematic language with coded meanings in elements such as numbers, set design, colors and paintings.

Through an interpreter, Hwang says, "I was totally financially deprived" around 2008, when he conceived the story "and wanted to depict the society I was living in. Why do the haves continue to accumulate wealth? And why do the have-nots continue to lose [what little] they have? I wanted to make some allegory of how this widening gap is unfolding."

During his years of financial struggle, Hwang says he "spent a lot of time reading comic books," including ones involving survival games. He wondered if he could become desperate enough to compete in them, and whether he could survive them. Thus, the larva of "Squid Game" was hatched.

"I wanted this to feel like a story that [really] could happen somehow, so I wanted to make sure the boundaries between real and fake are well felt in the production design. When I was studying in the States, I went to Las Vegas once. I went to these casinos in the Paris and the Venetian hotels, and I was startled. People were playing games in the completely fake Paris and completely fake Venice.

Hwang says he added Rene Magritte's "Empire of Light" to the room where the Front Man, who oversees the deadly games, watches. In the painting, Hwang says, "night and day would be coexisting ... I wanted the players as well as the viewers to feel that surreal feeling I had when I first went into those casinos."

In the series' first contest — Red Light, Green Light — hundreds of people die in a matter of minutes. But the giant set is clean and fanciful, like a park for kids: "You see the point where the fake sky touches the real sky."

"It's the first game," says visual effects coordinator Cheong Jai-hoon. "While we wanted it to be unique, we didn't want it to look too unfamiliar. We wanted it to be like a buffer zone to go from real to unreal. I told director Hwang it could be like 'The Truman Show.'"

Production designer Chae Kyoung-sun confirms all the scenes in cities were shot on location for tactile realism, as opposed to the meticulously executed sets on the island of deadly contests.

Still, says Hwang, "There's almost no scene where the VFX wasn't used, but it was so well done that people didn't really notice. Making sure everything looked real and hiding its existence; that was the key mission of the VFX team, and they did a remarkable job.

"In the game of 'Marbles,'" he says, "it's a set that looks like a village but [actually], it's just walls" with nothing behind.

Chae says, "Director Hwang told me when he was little, they would play in the alleyways and when the sun set, the moms would call them. It's very nostalgic for a lot of Korean people. We had sunsets on [each of the four walls], so whenever we'd shoot, from whichever angle ... the sun was seen."

The filmmakers expressed the gap between haves and have-nots in details such as the players' Spartan sleeping quarters. The things they were given — "We went for the Walmart or Costco look, where commodities are stacked really high. They're treated as less than human," Chae says.

There's also class strata among the contestants themselves. "There are differences in power: There's male, there's female, there's non-Korean people. I wanted to portray [this] through the different heights of the beds and the layers and the steps," Chae continues.

Meanwhile, the "VIPs" lounge in luxury and observe on monitors as players are shunted down desired paths.

"The mazelike corridors, the walls are really high. The contestants don't know where they're going because they can't see over the walls. The VIPs have a bird's-eye view," Chae adds.

Costume designer Cho Sang-kyung says, "I suggested dressing the characters in matching tracksuits commonly sold in the past in supplies stores in front of schools. As we decided on green, I explained to the director that we should dress masked characters in the contrast color, pink."

"Green is the color most often used in training suits worn by elementary-school students," says Hwang. "This is a story about people putting their lives on the line while playing games they played as a child.

"As to the pink jumpsuits worn by the soldiers and the managers ... When you encounter someone wearing a jumpsuit, you become kind of afraid, but I wanted the contestants to feel ... like they're coming into an amusement park, not to be too threatened at first. So we decided to use a fun and relaxing color: hot pink.

"Black, obviously, is a symbol of death. If you look at the coffins, it is [black] wrapped with a hot-pink ribbon."

The competitors are assigned numbers; few are known by their names. It's significant one of the oldest players is assigned the number 1. The protagonist, down-on-his-luck everyman Gi-hun, gets the last number, 456 — he's at the very bottom of the food chain. But the meaning of the number of his hometown friend, Sang-woo, who's in the middle in some ways, is less obvious to non-Koreans: 218.

After ruminating over "Squid Game" for more than 10 years, Hwang says it was in the shooting of the very first game, Red Light, Green Light, he felt everything coming together, that the contrasts would work.

"A giant doll would be looming over them and there would be a killing spree, a shooting, set in a childish game," he says. "We did this slow-motion filming for the actors who were being shot. Afterward, I played it together with 'Fly Me to the Moon' … Everything I had been thinking in my head was unfolding before my eyes. I had mixed feelings of it being beautiful, sad, desperate and hilarious at the same time. That was the moment I felt, 'I am making something that hasn't been seen anywhere.'"