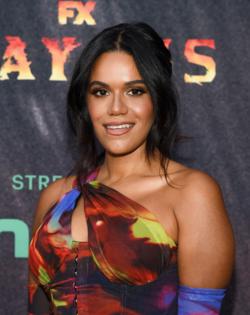 NEW YORK — Bronx-born actress Justina Adorno is on the ride of a lifetime with the biker drama “Mayans M.C.”

“It gets really deep and personal,” Adorno told the Daily News of the series. “At first glance, you say, ‘Oh, this is a biker show about bikers and gang violence,’ and we forget that those people are people, too. They didn’t just choose to do this, and it’s more than what meets the eye.”

The FX series premiered in 2018 as a spinoff of the network’s popular “Sons of Anarchy” and centers on the Mayans Motorcycle Club — a gang based along the border of California and Mexico.

Adorno’s Nails is the fiancee of one of the show’s main characters, Mayans member Angel Reyes. She unexpectedly becomes pregnant, presenting new challenges for her and Angel ahead of the latest season, which premiered last month and airs Tuesdays at 10 p.m. ET.

“I feel like Nails is one of the more relatable characters,” Adorno, 31, said. “She met Angel Reyes at the bar, working, and she gets into this relationship with someone who’s not ready to be in one. ... They’re trying to make it work.”

Adorno, who has Puerto Rican roots, loves how “Mayans M.C.” features a predominantly Latino cast and stories “that need to be told.”

“Just to see other individuals that look like me, that have similar backgrounds as I do, on screen makes such a big difference for anybody who is a storyteller. ... We’re always depicted as violent or sexual, and the show highlights that, but also brings it down to reality as well,” Adorno said.

Adorno spent the first 10 or 11 years of her life in New York before moving with her family to South Carolina, where her dream of becoming an actress took off.

“My parents always encouraged me to take part in any church performances, or my mom would bring me to Broadway sometimes,” Adorno said.

“Any time there was some sort of acting, musical [opportunity], I would always be so attracted to it. In South Carolina, I really had no other outlet but the arts to feel myself, to feel connected. It’s a small town, and I was just not for it. My way to get the most out of life and have an adventurous, fulfilling mindset, I got that through the arts.”

After graduating from Coastal Carolina University, Adorno moved back to the Bronx in 2013 to pursue an acting career, saying she “had no Plan B.”

She’s had recurring roles on multiple TV shows since, and played the series regular Yoli on ABC’s 2019 mystery-drama “Grand Hotel,” which was executive produced by Eva Longoria.

Adorno believes her work on “Mayans M.C.” could become her breakthrough role.

“I’ve never done two seasons in a row with any other show before, and it’s definitely a different experience,” Adorno said. “It’s meant the world to me.”