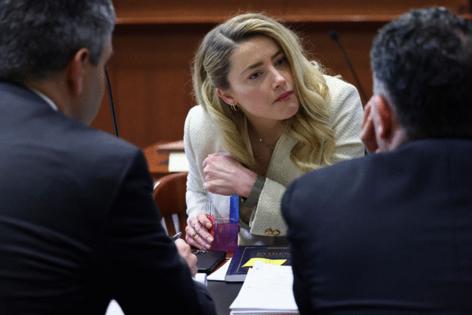 Paul Barresi was a mustachioed stud who appeared in “Co-ed Fever,” “Bad Girls II” and other X-rated films.

Now he’s an issue in Depp’s $50 million defamation suit against his ex-wife, who claims Depp repeatedly assaulted her.

In a deposition taken in April 2021, Depp’s lawyer Ben Chew asked Heard’s former attorney Eric George whether he was aware of Barresi’s history in adult film. When George’s lawyers instructed George not to answer, Chew quickly said, “We’re going to fight this another day.”

Chew then asked George what tasks he gave to Barresi with respect to investigating Depp. This inquiry was also met with objection from George’s counsel and instructions for him not to answer.

Barresi told me, “It was Amber herself who assigned me to find incidences involving Johnny’s past bad acts, going as far back as the Viper Room days.”

The private eye was supposed to find other women Depp had physically abused, but came up empty.

“Mr. Chew was going down a rabbit hole when he quizzed Mr. George about my former adult entertainment career,” Barresi said.

He added, “It was hypocrisy of the highest order. Evidently Mr. Chew forgot that Johnny Depp’s co star in ‘Cry-Baby’ was Traci Lords, one of the most controversial and notorious divas in adult entertainment history.”

Barresi starred with Lords six years earlier in 1984′s “Miss Passion.” Barresi said, “Unlike Johnny in ‘Cry-Baby’ however, the big-screen exposure I got in ‘Miss Passion’ was without the benefit of clothes.”

Barresi added, “Johnny’s lawyer should be very pleased that after three months of investigating Johnny, the only thing I found out about him was that everybody loved him.”

Anne Heche, who dated Ellen DeGeneres before she married a man, has a new woman in her life.

Heche added “partner” to her Instagram bio, which clearly refers to Ami Goodheart, a talented 1920s-style dancer who is now a successful costume designer, Michael Musto reports on Queerty.com.

Goodheart lives in the same L.A. building as Anne, and they went together to the Costume Designers Guild Awards in Santa Monica, California, on March 9.

“We met a year ago, and we are friends. And more. We’re more than friends,” Ami stated on “11:00 Live” Instagram chats, while Heche was in Canada on a movie set.

“She’s stunning, beautiful, and a size zero. We dress up every day. I wish she was next to me right now, I miss her so much. We’re used to spending every day together.”

The Cannes Film Festival is eerily devoid of Russians this year. Muscovite oligarchs usually have big yachts and large entourages of long-legged lovelies on the Riviera, and throw late-night parties fueled with vodka.

But all Russian and Belarusian movies were removed from the schedule after the invasion of Ukraine in late February.

Meanwhile, Ivanka Trump and Jared Kushner will be hitting the fest with their checkbook open.

Kushner, who has a new fund with $2 billion from the Saudis, is said to be looking to invest in either a studio or a production company. The couple was in L.A. recently for meetings and social gatherings including a dinner thrown by art dealer Larry Gagosian.

Vera Wang, Rebecca Moses, Nina Garcia and Robert Verdi all agree fashion needs to come back. Post-pandemic it’s time to dress up again. That was the consensus at the Rising Star Awards at Chelsea Piers.

Moses said, “I don’t think we became less fashionable during the pandemic, I just think our lives went through a dramatic change and we didn’t have to opportunity to really dress.”

Elle’s Garcia says to throw away the pandemic pants: “We are all craving to wear nicer clothes after the pandemic. Go out. Look our best. Burn all those sweatpants in a pile!”

Brad Kitkowski, owner of Isola restaurant on Shelter Island, has a new chef, Andrew Molen, whom he’s known for a decade.

The two first met when Molen was the chef at Sunset Beach, and Kitkowski was there for Sunday brunch.

Kitkowski invited the chef to play golf the next day and bet him that one day Molen would work for him. It only took 10 years.

Sutton Foster, starring with Hugh Jackman on Broadway in “The Music Man,” has launched a social media campaign called Sutton’s Spotlight to help find homes for dogs from the Humane Society of New York.

Big-hearted Sutton is featuring older dogs and animals with special needs on her Instagram, pets who might otherwise be overlooked.

Jean Shafiroff will kick off the Hamptons social season with a party for the Southampton Animal Shelter on the Friday of Memorial Day weekend.

The event for 200 will be held at the Southampton Historical Society where there will be a photography exhibit of pets with their owners. Shafiroff is pictured with her bulldog Rosita.

When the 73rd and final episode of “Game of Thrones” premiered on HBO in May 2019, the fan reaction was ... mixed at best. After investing years into the world of Westeros and witnessing countless bloody betrothals, ...Read More

Lions and poachers and snares, oh my! In the satisfyingly grisly survival thriller "Beast," Idris Elba plays a grieving widower who drags his two teenage daughters to a South African game reserve, embarking on an emotional...Read More

Anyone going into “Sprung” with no idea who created it will probably be able to determine within minutes that they’re watching a Greg Garcia joint.

Like many auteurs, Garcia has established a distinctive brand for ...Read More

For nearly two decades, the pioneering rapper from Queens has made it his mission to inspire, ...Read More

PITTSBURGH — Politicians using inside information to profit off the misfortune of others. Businesses taking advantage of stimulus money. Regular folks hoarding scarce supplies. Those were the stories Greg Garcia couldn't...Read More

In the first episode of "She-Hulk: Attorney at Law," audiences not only learn how Jennifer Walters gains her superpowers — they also discover that she's a tad obsessed with Steve Rogers' sex life. It's something she ...Read More