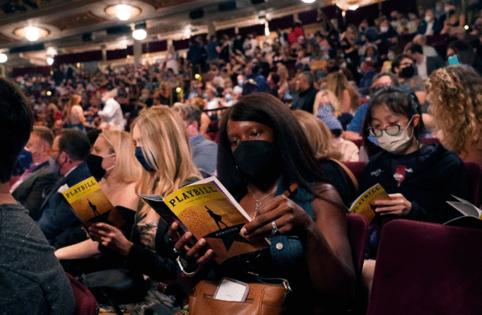 The extension from the Broadway League, a trade group that sets coronavirus policy on Broadway, comes as New York rides out another COVID wave, the latest driven by uber-contagious subvariants of the omicron strain.

COVID turned the lights out on Broadway for 16 months, and the Theater District has broadly maintained strict virus precautions, though vaccine mandates dropped at many playhouses this spring.

Despite virus bumps and frequent cancellations, theater has made a resilient comeback in Manhattan. Thirty-five shows are now running in Broadway’s 39 operational playhouses, according to the Broadway League, and attendance is on the upswing.

Weekly attendance has more than doubled after cratering at Christmastime, when the initial omicron wave whipped New York. Ticketed attendance was above 246,000 last week, the Broadway League reported, up from about 100,000 the week of Christmas.

The 75th annual Tony Awards, set for June 12, could help further boost interest in Broadway, a key cog in Midtown Manhattan’s economy that slumbered for so long.

“We’re thrilled that nearly a quarter of a million people are attending Broadway shows weekly in this exciting spring season,” Charlotte St. Martin, president of the Broadway League, said in a Friday statement. “As always, the safety and security of our cast, crew, and audience has been our top priority.”

“By maintaining our audience masking requirement through at least the month of June, we intend to continue that track record of safety for all, despite the Omicron subvariants,” she added in the statement.